Passion On Stage in “Master Class” at Rogers Center 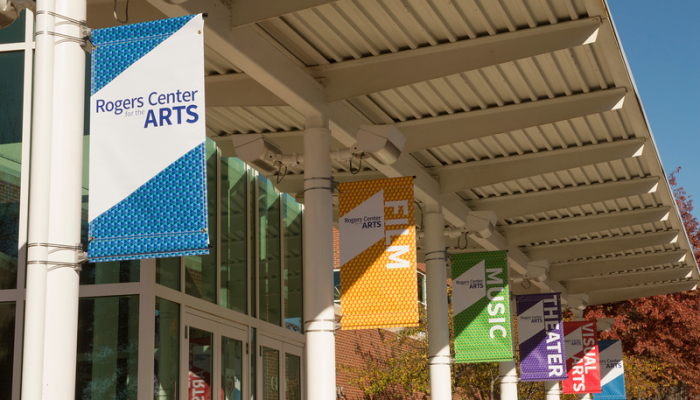 The play “Master Class” was performed at the Rogers Center Oct. 4-7. Written by Terrence McNally and directed by Fr. Rick Piatt, the show stars professional opera singer Christina Lamberti, Merrimack’s fall artist in residence. Lamberti is helping mentor the students in the production, and also had her own concert at the Rogers Center on Sept. 30.

In “Master Class” Lamberti plays Maria Callas, the famous Greek-American opera singer who was at the height of her career from 1949 until 1965. The play looks at an older Callas no longer in her heyday, as she teaches a master class at Juilliard to aspiring opera singer students. While doing so she reflects on her life and career and tries to embolden the students to sing with grace and talent, but more importantly, passion for the art and craft of opera.

Sometimes known as “La Divina” by her fans, Callas was celebrated for her angelic singing style and astonishing performances. Her website claims that the media portrayed her as “demanding and temperamental” in her daily life. Her many recordings from the roles she played are still around today, and she is still revered for her unmatched talent.

Piatt decided that this particular show needed to be produced at the Rogers Center this season for a few reasons. “It’s an extremely strong show that showcases strong women of a certain age and strong women who are up and coming,” Piatt says. The thing Piatt loves most about “Master Class” is its passion. “This is the closest I’ve come, I think, to reading a script where I feel like the playwright and the characters involved really understand the passion for art and the need and necessity for culture and artistic expression. I understand Callas’ passion. It’s just such a passionate, energetic, lifegiving piece.”

If you did not see this production during its four show run because you did not think you like opera, think again. While it revolves around students learning lessons on how to be an operatic artist according to Callas, there’s not much opera singing on stage. “This is a way for people who don’t know opera to get a taste for it,” Piatt explains. The audience is also engaged as a character themselves, according to Piatt, so they’re part of the action, watching it unfold in real time.

The students in this production are played by Merrimack Theatre Arts majors Madison Christian, Benjamin Mendonca and Mikaela Macomber. They have been able to learn from Lamberti throughout the rehearsal process, as they watch her perform her craft and listen to her comments about their own performances. Lamberti has performed all over the world, and has performed in most of the famous opera roles mentioned in “Master Class,” including Tosca from “Tosca,” and Amina from “La Sonnambula,” among many others.

Merrimack senior Macomber took advantage of the time she had with Lamberti. “As well as being a professional opera singer, she is also a vocal coach,” Macomber says. “She took some time out of one of the rehearsal days to use her consistent pedagogical skills to help me when I was struggling with some of the vocals.” Macomber says Lamberti also shared her love for Callas, her own knowledge about the famed opera singer, and her personal experience being a student at conservatory.

Lamberti has enjoyed her time at Merrimack. “It has been an incredible experience to be a part of the Merrimack College Community this past month. The students are very talented and give 100 percent all of the time,” she says. Working on this show in particular has been exciting for Lamberti. “Portraying Maria Callas has been a dream come true for me. I have adored her singing and artistry since I was in high school. I am honored and blessed to be portraying one of the greatest opera singers that ever graced the operatic stage,” she says.