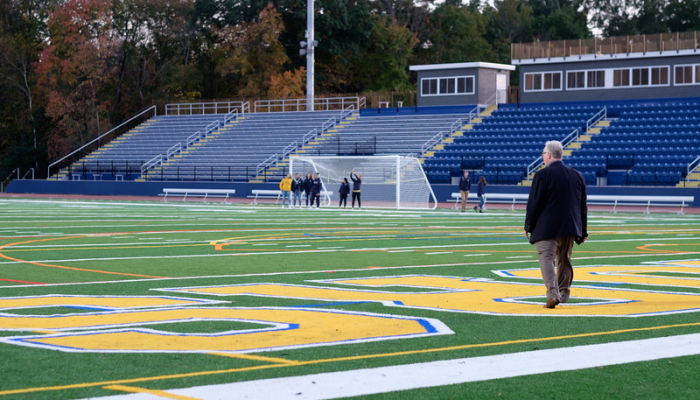 Merrimack College Rugby Club and North Shore Club Rugby played in a hard fought, physical match that resulted in a unofficial loss for the Warriors heading into their Oct. 7 game at Lasell College. The Merrimack Club Rugby Team quickly scheduled a scrimmage with North Shore Club Rugby Team Saturday afternoon after Babson College forfeited the Warriors’ second official league match. After a week one loss to Curry College, the team is now 1-1 in league play.

The Merrimack College Club Rugby Team has endured a lot in the last few years. They were the joke of the league for years, including the 2017 fall season where they lost every game. The team turned things around when coach Brendan “Ditka” Galbraith brought in a fresh new group of freshman and sophomore athletes that were able to pick up the game quickly and absorb the knowledge Galbraith gained over his years of playing.

Sam Rebinskas, who joined in the spring of 2018 and was able to get on the field immediately, said, “None of the rookies had ever really seen the sport before, but Ditka was able to get us playing at a high level in weeks. We bought into everything he taught us and in return Ditka gave us the chance to earn playing time.”

The team shocked the rugby community during the 2018 spring season by starting the season 8-0 and finishing the regular season 9-1. The spring team even made the Atlantic North Regional Tournament, but lost. They finished one game away from the National Championship Tournament in Philadelphia.

The 2018 fall team will now have to follow what became the best rugby team in Merrimack College history. Beloved Coach Ditka had to leave mid-season last term and will now be replaced by Dan Solomon. Solomon was the Salem State coach and has a National Championship under his belt as well as decades of coaching experience. The team will also have new leadership heading into the fall season.

Sophomore Sean Conroy stepped down as captain and junior Ryan McIsaac took over. McIsaac showed his leadership skills on and off the field during the stretch run last season and more than deserves the title. Conrad Ortega, who is in his second year as a rugby captain said of McIsaac, “I believe he is well fit for the captain position of the rugby team. He has a lot of knowledge of the game and he possesses great leadership skills. Before our matches, he hypes the players up and knows how to lift people up when players are down. His work ethic on and off the field is most impressive as well. Overall, he deserves to be captain for the program because of all the qualities listed and what he offers on the pitch.”

The team has a big season ahead of them as they must battle the expectations of last season while under new leadership and a brand new offensive system called the 1-3-3-1 attack. The 1-3-3-1 is a offensive formation set up to overpower the defense by grouping the biggest players in the middle and leaving the fast players in space on the sidelines.

Coach Solomon has also installed new practice procedures this year, most notably pre-practice runs. The team must now bring running shoes along with cleats to practice as they warm up with a one-mile run around campus. He is also in the early process of establishing a new defensive system that is more advanced than what the team currently runs.

There are also a bunch of incoming freshmen leading to obvious growing pains, but the team is already better than the team a year ago and projected to be a solid team this season. Sophomore Ian Ganley said, “I think we are playing better than last year because the returners are leading the freshman and we are becoming a better team. We have a good coach this year and people are coming to practice and putting in work.”

The fall season will conclude with four more league matches before the start of the playoffs.