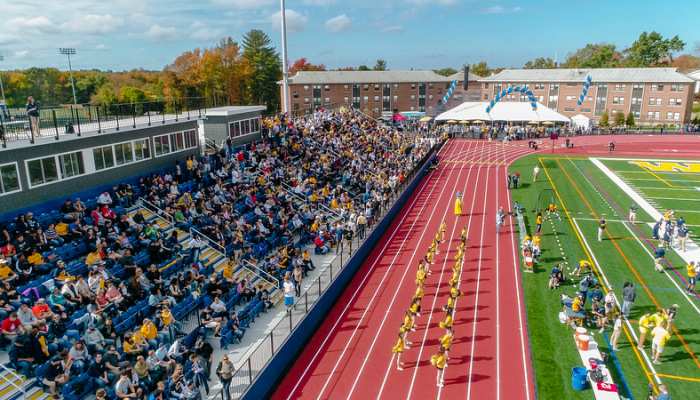 Merrimack’s move to Division I factored into Elliott’s decision. “As a future student the move to DI is amazing to hear, we get to play in [a] tougher conference and [that] gives all the athletes an opportunity to play at the highest level of collegiate athletics,” Elliot said.

Although Macchi and Haba announced their commitments before knowing that Merrimack was transitioning to DI, they are both excited by the prospect of a high level of DI competition. “I am very excited about the recent change to Division I, the NEC is a great Northeast conference and I can’t wait to be involved,”  said Macchi. “Especially being known as the new team in the conference, you know you’re going to have to prove your worth and that really motivates me.”

For Haba, the lack of playoff action as a result of Division I reclassification is understandably a bit sad, but that is not stifling his excitement to play at a high level of competition in the NEC. “I am excited to be able to play in the NEC, I hope I can help the team as best as I can to succeed in the NEC,” said Haba. It is a little disappointing that we will not be able to make the playoffs for the time that I will be there, but the experience of moving DI will overcome it.”

Various other factors influenced whether Elliott, Macchi, and Haba decided to attend Merrimack. “What made me chose Merrimack was a combination of everything. I really liked the campus, I got to tour the engineering building, which my intended major will be in, and really could see myself there,” said Elliott, who is an outfielder. “Merrimack was one of the better academic schools that I was looking at so that encouraged my decision.”

The three recruits have been playing baseball together since they were kids. Elliott and Macchi’s fathers actually shared a bond similar to the one that their sons currently share. “Jake’s dad and my dad used to [be] great friends back when they attended Franklin High School and worked at the same place together,” said Elliott. A friendship between Elliott and Macchi’s fathers progressed into Elliott, Macchi, and Haba playing baseball together as kids. All of those years of youth baseball lead to them winning a Super 8 Title as members of the Franklin Panthers baseball program this past spring.

Macchi, a catcher, knew Merrimack was a good fit for him pretty quickly. “Merrimack was always on my radar. After visiting in June of this year and meeting with Coach Barese, I realized why this program is so successful,” Macchi said. “Leaving the school that day I knew that Merrimack is definitely a place I may end up in the fall of 2019.”

Haba moved to Franklin when he was in third grade and developed a bond with Macchi early on. Haba is a swiss-army knife in the infield as he not only plays shortstop but also second or third base if needed. The comfortability that he has with his teammates has him really looking forward to taking the next step in his career as a student-athlete. “I am excited to be able to play with two other great players and people from Franklin High school,” said Haba. “It has been a dream to be able to play college baseball and now to be able to have that dream become a reality with two current teammates, it will be special.”

Franklin High School has a lot to look forward to as their big three will be in North Andover come fall 2019.