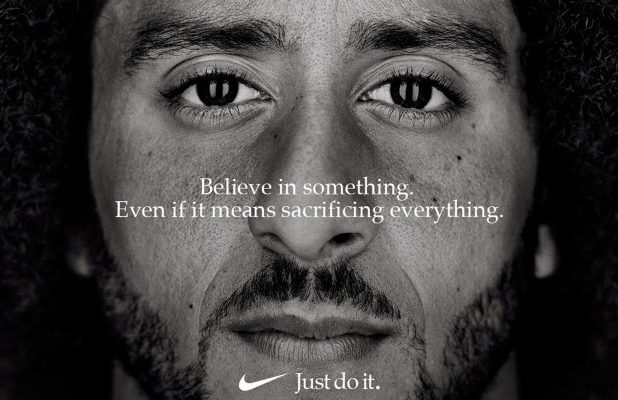 On Sep. 4, Nike announced that controversial figure and former NFL Quarterback Colin Kaepernick would be one of their faces of the thirtieth anniversary of Nike’s universally known “Just Do It” campaign. Since then, there have been reports of Nike knowing what would follow, backlash and all, but took the chance of involving Kaepernick in their promotional campaign.

The backlash towards Nike involved angry “fans” of the product destroying Nike apparel and saying that they would boycott the brand. This raised the question for many: is this helping or hurting the Nike brand? Was this Nike doing exactly what the ad of Kaepernick stated, “Believe in something. Even if it means sacrificing everything”?

According to CNN.com, the College of the Ozarks would be dropping Nike as their uniform provider due to this ad campaign. The school described it as choosing “country over company.” The Sept. 7 statement from the Christian college reads, “College of the Ozarks plans to remove all athletic uniforms purchased from Nike or that contain the Nike emblem. Student athletes will no longer wear the brand in response to the company’s new ad campaign.”

The College of the Ozarks was not the only college to follow through with such an act, as a number of other colleges and universities also announced that they would be letting go of Nike as their uniform partner and provider.

Across social media, it became a polarizing topic, with both positive and negative feedback towards Nike’s decision. “I feel like Nike has taken a downfall to their own company. Kaepernick’s biggest achievement in football was turning the whole league against the national anthem. He doesn’t deserve a deal with any company,” an anonymous interviewee said.

The boycott of Nike products was brought to focus by many people, with burning of Nike apparel and destruction of the popular sportswear. Destruction also took the form of people cutting out the Nike logo from their sneakers and t-shirts.

While some protested Nike, others went out of their way to purchase Nike products in support of the advertising campaign.

When the initial announcement took place on Sept. 4, Nike’s sales numbers hit a 3 percent drop within the first few hours. However, a report by Edison Trends states that Nike’s online sales grew 31 percent from the Sunday of Labor Day weekend to the Tuesday following. The 31 percent rise shows that Nike’s risk for reward may have certainly paid off. “I think Kaepernick joining Nike is a good move. Nike has always been known for taking risks and it is paying off,” Merrimack student Rob Bonitatibus said.

While the rise of sales is always ideal, the biggest sign that this move by Nike may have been a success was through its own stock. Per the Bloomberg Markets, Nike’s shares hit an all-time high of $83.90 shortly after the debut of the ad, which led to even more exposure for the brand. “It was definitely a good move by Nike because they got a ton of exposure,” Merrimack student Scott Neville said.

Nike’s biggest athlete, Lebron James, even went out of his way to gloat about the situation on Twitter: 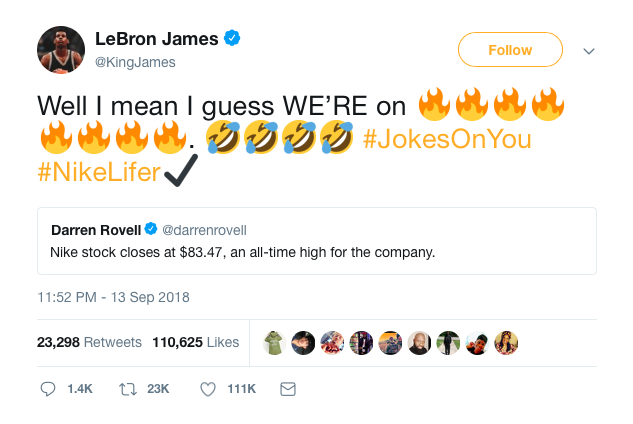 Through the continuous exposure and constant talk of Nike’s move to present Kaepernick as their “main attraction” for the thirtieth anniversary of the “Just Do It” campaign, they showed where they stand in the whole controversy. Nike, the official provider of jerseys and equipment for the league that pushed Kaepernick out, the NFL, may have even taken a shot at a partner. With the current Kaepernick vs. NFL lawsuit still going on, it should raise questions as to not only Nike’s sales, but their partnership with the NFL as well.