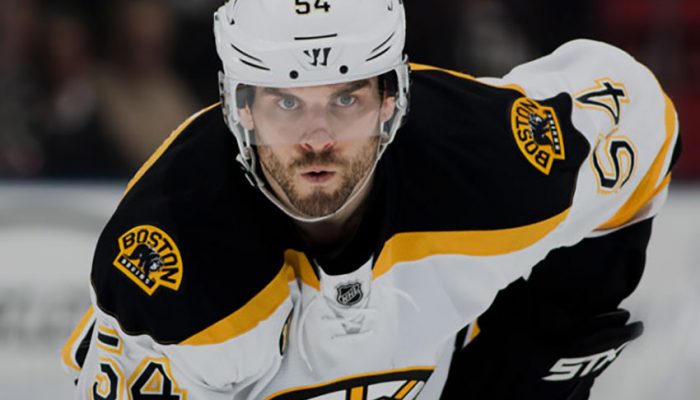 The Boston Bruins organization publicized a trade deal on Sept. 11 regarding their longtime defenseman and enforcer Adam McQuaid. The news shocked Bruins Nation and instantly created a buzz online where fans posted heartfelt messages to the 31 year old defenseman along with bitter words for the Bruins management.

Joe Haggerty, a Bruins Insider with NBC Sports Boston, wrote on Twitter, “Don Sweeney said he wasn’t worried about losing Adam McQuaid’s toughness and fighting ability citing Boston’s ‘team toughness,’ but there’s not doubt the Bruins are smaller and less intimidating today than they were yesterday.”

McQuaid was traded to the New York Rangers where fellow ex-Bruin, Ryan Spooner, had been traded earlier this year. In exchange for McQuaid, the Bruins acquired a familiar face, Steven Kampfer. Kampfer was previously traded by the Bruins to the Minnesota Wild for Greg Zanon during the 2011-2012 season. After his trade to the Wild, Kampfer spent a majority of his professional career jumping between NHL and AHL teams. During the past season playing for the Rangers, Kampfer appeared in 22 games collecting one assist, one point and 20 penalty minutes.

With the McQuaid trade, the organization definitely lost a solid defenseman,but simultaneously cleared up traffic on their defensive bench. Looking into the future, Kampfer may not see any NHL ice time this season, but will make a strong defensive leader for Providence as he’s already seen some pre-season action.

All in all, this trade was destined to happen at some point, it was just a matter of who and when. It will definitely sting seeing McQuaid go, but the Bruins have many young guns like Charlie McAvoy ready to go and patch up the wounds created by McQuaid’s departure.

McQuaid was drafted by the Columbus Blue Jackets in the 2005 entry draft during the second round 55th overall pick, however he was quickly traded to the Boston Bruins. Over his eleven year stint with the Bruins organization, he posted 13 goals, 66 points and 652 penalty minutes while wearing number 54.

Fans love McQuaid and consider him to be one of the toughest enforcers on the team. Fans even refer to him as “Darth Quaider.” McQuaid is infamous for his fights with various NHLers as well as his resiliency after taking hard hits, such as when he took a blade to the neck during a play against the New Jersey Devils yet continued to skate until a line change. McQuaid also rocked the mullet for many seasons which became almost as popular as the Boston Red Sox “Flow Bros” between Andrew Benintendi and Brock Holt. For some time, fans couldn’t go to the Garden without seeing at least one fan wearing a mullet wig.

Fortunately, McQuaid (and Spooner) will not be too far away as they remain in the Eastern Conference. The Bruins and Rangers are set to face off three times this regular season, with McQuaid and Spooner making their return to their true homes on Jan. 19. Bruins fans already seem to be eager for their return and it is easy to see why. It is true that Boston will miss McQuaid dearly, but one thing is for sure, number 54 will always be a Bruin in hearts of fans.