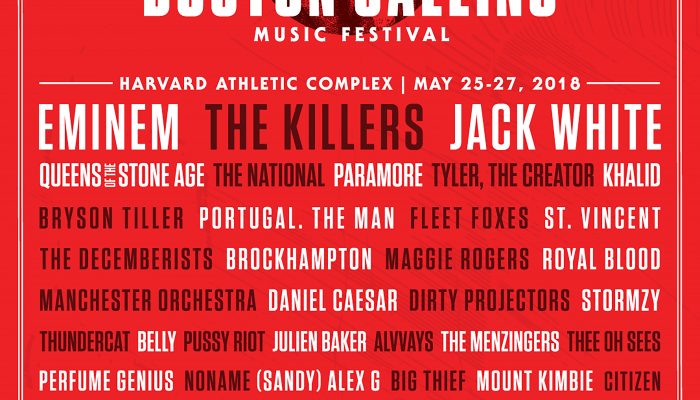 Boston Calling is coming back for another year of music, food, and entertainment from May 25-27. All of your favorite artists and bands will be together for three days of non-stop performing at the Harvard Athletics complex.

May 25: The first day kicks off with The Killers headlining. The Killers are one of the biggest rock bands in the world and most famous for their songs “Mr. Brightside,” “Human,” and “Somebody Told Me.” A fun fact about them: they were formed because the lead guitarist, David Keuning, put out an ad in the newspaper looking to form a band. Also performing on this day is Paramore, Portugal the Man, and Noname.

May 26: Continuing to bolster this strong lineup is Jack White. He is most known for being the lead singer of The White Stripes, but has released three, critically-acclaimed solo albums since 2012. Some of his biggest songs include “Lazaretto,” “Connected by Love,” and “Love Interruption.” A fun fact about Jack White: he runs a record label called Third Man Records and has a mobile “rolling record store” that travels from city to city. He really appreciates the origins of recorded music, and Third Man Records is one of the only labels that still records straight to vinyl. Also performing on this day is Queens of the Stone Age, Tyler the Creator, and Daniel Caesar.

May 27: The final day of Boston Calling features the one and only, self-proclaimed “Rap God,” Eminem. He has had countless hits over the years, including “The Real Slim Shady,” “Lose Yourself,” and “Stan.” A fun fact about Eminem: when he was growing up, he wanted to be a comic book writer! The final day also includes performances by Khalid, Bryson Tiller, and The Decemberists.

In addition to awesome music, this year’s festival will also have its largest food lineup to date. There will be 150 menu items for hungry concert-goers to pick from, including food from Tasty Burger, Union Square Donuts, and Area Four pizza.

Boston Calling is a must-see music event in the Greater Boston area. It is $289 for the three-day pass, but if you only want to go one of these days it is only $105. This is the place to be if you want to unwind after a stressful school year and listen to some of the best music the city has to offer.