The Importance of Teen Voices 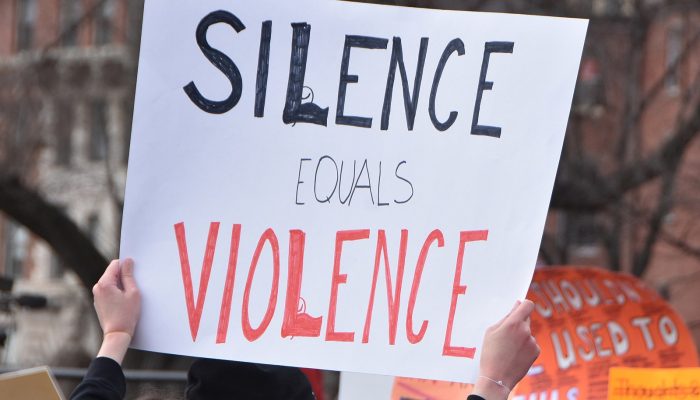 At this moment, the voices of the young are being heard in all corners of the country. This was movingly apparent at the March for Our Lives in Washington D.C. and across its sister marches, which occured around the country, on March 24. These events showed young people of America banding together to promote policies relevant to their lives, thereby demonstrating both the importance of their voices and of others listening.

Students at Merrimack are following this wave by making their voices heard, and pushing for change. Some students attended the rally at Merrimack on March 14 on national walkout day, others surely saw flyers throughout campus encouraging students to attend the March for Our Lives event in Boston. Both of these were promoted by the student organization Gender Equality at Merrimack. The President of Gender Equality at Merrimack, Sandra Hovsepian, says that the drive to promote the cause of the March for Our Lives at Merrimack is in keeping with her organization’s mission. “GEM believes in fighting for what’s socially right, and March for Our Lives aimed to spread awareness of the lack of gun control our nation has as well as awareness of the fear, anger, and disappointments students face each and every day because of gun violence in schools,” said Hovsepian.

Campus organizations, such as GEM, are a great example of the power of young voices. Groups like these show that the youth of today are interested in pertinent political and social issues and are ready to take action.

Some Merrimack students, like first year students Samantha Frey and Brianna Bennett, are taking it upon themselves to make the voices of the young heard in issues that matter to them. In order to work toward this mission they both attended the March for Our Lives event in Boston. They took part in the march to show their support for those who are affected by mass shootings as well as express their disappointment in the government’s limited response.

Frey and Bennett are just two examples of the wave of expression occurring around the country as the young demonstrate the strength of their voices by asking for change. But the young are not only speaking up about gun control. They have been speaking up about issues dear to them for a long time, from the Vietnam protests of the 1960s and 1970s to present-day issues regarding gender equality, sexuality, and race.

As this phenomenon attests, the collective voice of young people has immense power. However, they are often stereotyped or ignored. Young people are seen as reckless risk takers  who are too inexperienced to understand complex issues. Frey says she often feels as if she is not taken seriously by adults on controversial topics.

However, people are starting to acknowledge that young people understand a great deal. The success of March for Our Lives shows that young people have the ability to make sense of the present political climate and the intricacies of organization. It is just that stereotypical risk taker identity that allows teens to make such an impact. Standing up for what one believes in is a great risk, yet young people are still rising to the occasion.

Frey emphasized an impactful idea promoted at the march in Boston, saying, “One of the things that was constantly reiterated at the march was that this is a movement not a moment.” Regardless of whether adults take the voices of the young into consideration now, Frey believes young people “will eventually change this country for the better.”

Midterm elections are coming up and there is a push to get young people to vote. If students want political change there is no better way to attain it than to use their right to vote. Bennett explains, “I want to see youth voter turnout increase substantially at the midterms in November, and in future elections I expect to see younger people running for political office. The more we run, vote, and protest, the more we shape this country to be the dream it has always aspired to be.” Change comes from action, and the action of voting can help institute policies important to the young people of this country.