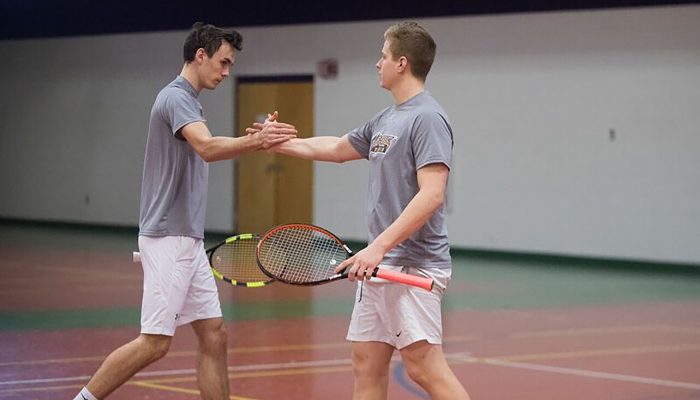 The men’s tennis team will begin their run in the NCAA tournament on April 30, where they will attempt to bring Merrimack its first national championship for tennis.

Over the last decade, one of the most, if not the most, successful sports teams at Merrimack College has been the men’s tennis team. This season, for the eighth time in 10 years, and for the second consecutive season, the Merrimack men’s tennis program made it to the Northeast-10 Conference Final. Although the men’s tennis team fell on Saturday to SNHU in the NE-10 Championship by a score of five sets to two, they still remain in contention for the NCAA tournament.

The level of consistency and dominance that the Merrimack men’s tennis team has shown over the last decade demonstrates the strength of the program as a whole. When asked about the dominance of the men’s tennis team, coach Alex Loyer says, “First and foremost it’s about the players on the team. We have been fortunate to have many talented, hardworking guys who come to Merrimack and excel in tennis and in the classroom.”

The strength of any team can change from year to year as new players come and others graduate, but the tennis team stays consistently strong. Loyer explains, “Since the team has been successful for many years, whenever a new class arrives on campus they join a team with a culture of success and high expectations. Members of the team work hard throughout the school year on the court and in the weight room to be at their best in the spring.”

This year’s team is a small with only six players. Although there are limitations to having a small team, there are also benefits. “The guys spend a lot of time together outside of tennis. Being a small team, the closeness and chemistry that we have creates an atmosphere where guys will go the extra mile for each other,” says Loyer. Returning students on this year’s team include seniors Mike Belov and Frank Vega, who are joined by sophomore Alex Fedorov. Paul Weidinger, Denis Davydov, and Tyler Clontz all joined the team this year as transfer students.

“Our three returners have improved since last year, and our three new players have stepped in and helped us right away,” Loyer adds.

The NCAA tournament will not be a cakewalk for the Warriors, as it’s always difficult to beat highly ranked teams, but Loyer has confidence in the team’s competitiveness. The team knows that the differences between the top teams in the region are very small, which is motivating to them.

No matter what happens during the tournament, the men’s tennis team will still be one of the most dominant teams on Merrimack’s campus, but that does not stop them from improving or wanting to expand next year.

The team will lose two players who graduate this year, but there are six strong players joining next year’s team. “Having a bigger roster allows us better flexibility for injuries, sickness. It also will allow us to challenge players in different ways during practices, and to have an element of competition where a starting spot is not guaranteed to anyone,” Loyer says. “If we can create and maintain a positive team culture then we will have strong foundation to grow our program going forward.”