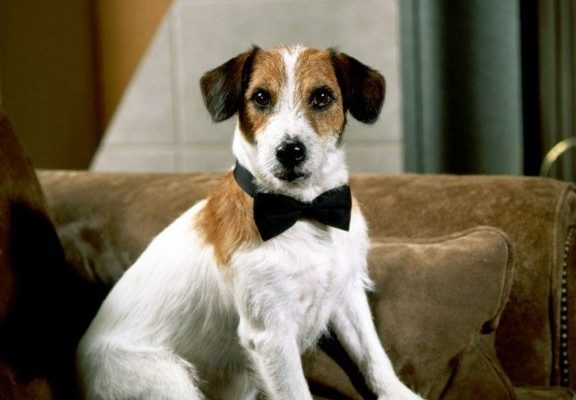 Everyone knows that the characters in a TV show are vital to its success, but in some cases, those characters can be dogs and they are just as as important. In this article we are going to look at some of the best dogs that were series regulars, or vitally important to a show’s plot. I have chosen three different types of shows for this article: one sitcom, one drama, and one animated program.

The first dog to make the list is personally my favorite, and that dog is Eddie from “Frasier.” Eddie was a main cast member for every season of “Frasier,” and was played by two different dogs throughout the show’s eleven-season run. Eddie was played by Moose, a Parson Russell Terrier, for seven seasons, and was then played by Moose’s son, Enzo, for the remainder of the show. Moose even made it to the cover of Entertainment Weekly, which just demonstrates how famous Eddie and Moose became at the height of the “Fraiser.”

Throughout the show’s run, Eddie was Martin’s (Frasier’s father) number one companion, and was usually right by his side. Eddie also served as a way to taunt Frasier, who is not the biggest fan of Eddie for the first part of the show. Eddie is usually seen doing something to annoy Frasier, or doing something with Martin. He is also commonly the main focus of the ending sequence when the theme song plays and there is no dialogue.

The next dog was not a regular on this show, but the emotional impact that he had on the show was enough to make it into this article. This dog is Seymour, who was Fry’s dog back in the twentieth century on “Futurama.” Although Seymour only made it into five episodes, the impact he had on Fry, and his role in maybe the most emotional scene of the series, makes him one of the main references to “Futurama” among fans.

The emotional scene comes from the episode Jurassic Bark, which was nominated for an Emmy Award that year. If you know “Futurama,” you know that Fry was frozen for a 1000 years in a cryogenic tube. During the fourth season, we learn that Seymour’s remains are in a museum in New New York and Professor Farnsworth can create a clone of the dog. Fry declines because he learns Seymour lived for twelve more years after he was frozen. But what the audience does not learn is that right before Fry was frozen he told Seymour he would be right back, and instructed him to stay on a corner outside the pizza shop. The end of the episode is a flashback depicting Seymour staying on this corner waiting for his owner to come back everyday for the next twelve years. This scene brings tears to many people’s eyes, and was probably the saddest scene of the entire show.

The final dog, again, was not a regular on their respective show, but it did make an important appearance in both the first and last episodes of the show. This dog is Vincent from “Lost,” who was Walt’s dog at the time of the plane crash. He was Walt’s at the beginning, then becoming Shannon’s, and eventually ending up with Rose and Bernard by the end of the show. Fans of “Lost” know all the theories and questions surrounding Walt, but there are actually some theories out there about Vincent, too.

When it comes to the overall plot, Vincent can be seen throughout the show running around and spending time with the stranded people on island. He was the one who woke up Jack in the first episode, and when Jack was dying in the final episode, Vincent laid down to comfort him. He seems like a harmless dog who was just used for companionship, but there may be more to his story.

There is a theory that Vincent is actually the a bringer of evil or death. It seems that bad things often happened to people who hung around him too much. Boone and Shannon, who both spent a lot of time with him, end up dying. When a dead body washes up on the shore, Vincent was right there. He pulls the cover off of Paulo and Nikki’s supposedly dead bodies, and then watches as they were buried alive. Walt is kidnapped and Claire goes crazy, and both of them were caretakers of Vincent at one point. However, if Vincent hadlarger importance to the show just like Walt was supposed to, then that possibility was written out when Walt was written out of the show. We may never find out for sure, but people will always keep trying to find the answer behind this important television dog.