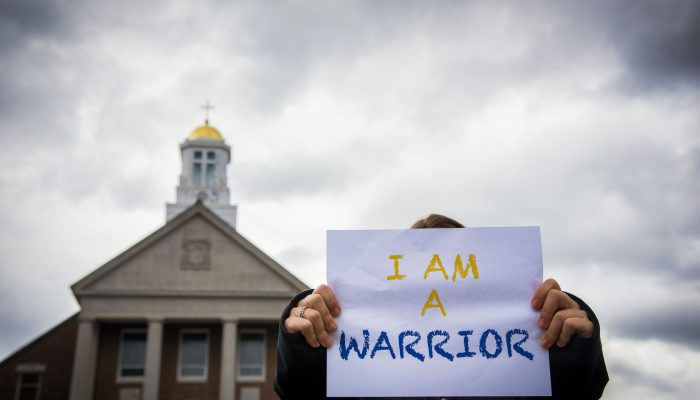 Senior marketing students have discovered our campus community is directly impacted by slurs and stereotypes.  While Merrimack prides itself on acceptance of others, some are still impacted by words and mentalities that students use everyday. Our actions are impacted by social media, but more so by the actions and words presented by those around us.

This semester, students in the Marketing Seminar course worked with EdVenture Partners who then partnered us with the Anti-Defamation league. Students were given funds from the Anti-Defamation League to carry out our project on the Merrimack College campus and community. The students conducted research about hate crimes within their area; choosing to specifically focus on the topic of bullying. These seniors created a marketing plan to execute their goals of shining a light on unfair stereotyping within their college campuses.

On Thursday, April 5, students took a stand against stereotypes and hate crimes on our campus.  Students were stationed on Main Street in the Sakowich Center from 12:00 to 3:00 p.m. asking students to make the pledge against unfair stereotypes. The class printed sheets where students and faculty got to fill in specific hate crimes they are standing against and sign their name as a pledge to help end them in our community. Students chose to stand against bullying, cyberbullying, body shaming, racial slurs, hazing, and sexual discrimination.

The slogan, “Lights On,” is a creative way show that we are not afraid to talk about the blemishes within our campus. Organizers of the project found that students were often silenced by such ideas, especially with the thought of them existing on our campus. “Lights On” is bringing attention to these problems and recognizing that they exist. For many, the first step to ending these hateful acts is just acknowledging their presence.

On April 12, a speaker from the Anti-Defamation League, Dan Levinson, presented to the class and other students about hate crimes that still exist around the United States today. Dan spoke about major hate crimes that gained attention through the media, as well as recent religious and racial hate crimes that have happened in neighboring states. Of the 50 states, 45 have adopted hate crime legislation. The five who do not have these laws are Arkansas, Georgia, Indiana, South Carolina, and Wyoming; where major hate crime acts have taken place in the past five years killing and targeting hundreds of people.

While Dan’s information and statistics were to educate our study body, students felt a sense of shock and disgust as he went through his presentation. Many of us may not see these major hate crimes taking place in our community, but there may be little actions being taken by few that are targeting select groups in even the slightest of ways. Posters or comments about LGBTQ or different religions on campus are setting back our community. This senior marketing campaign class is taking a stand to innovate against hate and shine a light on hate crimes. Their first act was to educate our campus; with the hope of students taking this information, innovating against hate, and bettering the Merrimack community.