Winter “Mud Lots” and the Future of Campus Parking 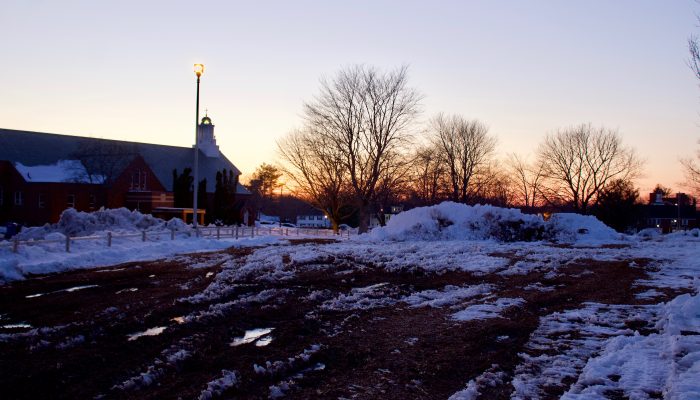 Students met with President Hopey at “Pizza With the President” on March 2 to discuss several issues, including the bane of most college students across the country: campus parking. President Hopey discussed a plan to create several hundred new parking spaces this summer. The school is looking at a few different locations, such as behind the new football stadium, and at using different types of materials, such as traditional pavement or an artificial material that allows rainwater to pass through it.

The main reason for the parking problem is Merrimack’s increasing enrollment. Merrimack grew from 3,260 undergraduate students in the fall of 2016 to 3,286 undergraduate students in the fall of 2017. The graduate student population also increased by 75 students over the last year, although they mostly park on campus in the evenings. The total number of full-time faculty and staff also grew to accommodate the growing student body on campus. More cars on campus without more space to park them obviously creates problems.

During the 2016-2017 school year, Merrimack rented parking garage space in North Andover with a shuttle bus running to and from campus, but this parking solution did not prove to be particularly popular among students.

To solve the parking shortage for the 2017-2018 academic year, Merrimack created new parking spaces along state highway 114 near Sullivan and Austin Halls. However, the grassy, wood-chip covered area now designated as parking did not mix well with the New England winter. These parking areas become slippery, hard to maneuver, and even hazardous during and after precipitation. These lots are now known by many students and faculty on campus as the “mud lots.”

Brendan Costa, a current Merrimack senior, says he cannot enter the “mud lots” on rainy days because his car does not handle the muddy surfaces well. After especially rainy or snowy days, it’s not uncommon to spot drivers struggling to gain traction in the “mud lots,” to the point where their cars need to be towed out. While these temporary lots come with the obvious perk of being able to park one’s vehicle close to academic buildings, they also come with an added amount of stress and possible expense.

A Merrimack faculty member, who preferred to stay anonymous, states, “These lots are nothing short of troublesome, and prove to be more bothersome to those who park in them than their intended goal of being helpful. Students and professors have both admitted to having trouble in these lots.” The faculty member also claimed, on two separate occasions, that passing cars lost control in the muddy conditions and hit her car.

Many on campus wonder why Merrimack did not just pave a new parking lot prior to this academic year, and the answer reveals a complicated negotiation between the school, the town of Andover—who has authority over conservation matters on campus—and the fact that a lot of Merrimack’s campus is on state-regulated wetlands or wetland buffer zones.

Wetland and buffer zone regulations limit how much can be built—or how much land can be covered by pavement—in order to maintain the proper drainage of water. Merrimack College’s recent physical expansion with new state-of-the-art buildings, such as Crowe Hall and the new campus welcome center, then limit other areas from being covered by buildings or pavement.

On campus, this relationship between Merrimack College and the Andover Conservation Commission is colloquially referred to as “environmental credits.” For every paved lot or building Merrimack adds, it loses “environmental credits” for future building and paving. But if Merrimack uses special materials that allow for drainage, it gives them more flexibility to physically expand in other areas or pave another parking lot. For example, Merrimack built the new Martone-Mejail football field with an artificial turf technology that aids in water drainage, which then earned Merrimack more “environmental credits” instead of costing them. The timing of different projects as well as their environmental impacts plays a role in future approvals, whether parking lots or other structures.

The mixture of a growing campus community, parking scarcity, environmental and conservation regulations, and a neighborhood invested in the campus maintaining more green space makes this a delicate situation for the college. Even though the present parking situation on campus is in need of a improvement, discussions of paving a new lot, especially a lot using similar drainage technologies as Martone-Mejail field or gravel that would better withstand winter conditions, make students hopeful that the use of “mud lots” may be isolated to the 2017-2018 school year.