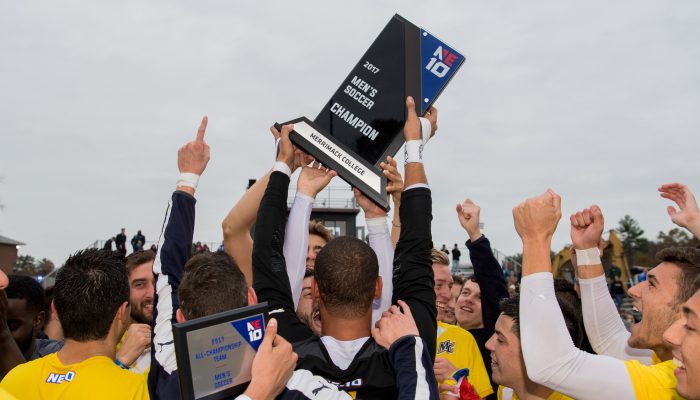 It has been a long time coming, but after twenty years the Merrimack men’s soccer team are finally champions.

It has been an unbelievable season for the Warriors as they finished the regular season ranked second in the Northeast-10 standings en route to a 16-2-2 record and being ranked 10th in the country amongst all NCAA Division II soccer programs. Although they had a fantastic regular season, their goal was much more than that. The men’s soccer team battled their way through the NE-10 tournament with wins over Franklin Pierce University and Southern Connecticut University setting up a date with the Bentley University Falcons for the championship.

On November 5th, the #10 Merrimack soccer team was faced with their toughest test of the season in a matchup with the Falcons with the Northeast-10 championship and an automatic bid to the 2017 NCAA Division II tournament on the line. The game started off slow with possession mainly being battled for in the midfield.

Finally, 18 minutes in Merrimack was the first on the board with a goal scored by graduate student Josue Ruiz Maya off of a corner taken by Kevin Esper. Esper sent the ball into the box and Ruiz Maya utilized the pass and jumped over a defender to strike the ball to the back of the net. The rest of the first half was quiet for the most part aside from Merrimack senior and NE-10 goalkeeper of the year, Lucas Rezende making two huge saves to keep the game at 1-0 Merrimack.

When asked about his feelings regarding the game, Rezende said “I was feeling confident going into it after the result against Southern CT, the guys were in good spirits and it was good to see that no one was taking the final lightly.”

With 45 minutes left until Merrimack could finally call themselves champions, rather than taking their foot off the gas pedal they kept the pressure up. Merrimack took five shots in the first 17 minutes of the half but the Bentley goalkeeper, David Price made a few great saves to keep Merrimack from sealing the victory. The Falcons used that momentum put forth by their goalkeeper and with five minutes remaining were finally able to get the equalizer off of the foot of Adam Watkins.

The final five minutes of regulation intensely passed by and with that brought one of the most exciting things in soccer, overtime. The sudden death overtime period opened up with a relentless Merrimack soccer team battling to keep their championship hopes alive. They possessed the ball and after a few minutes, off of another corner kick by Esper, Merrimack was able to score the championship winning goal off of the head of sophomore Aasmund Joedahl. Esper crossed it into the box and Joedahl perfectly timed his jump and headed the ball into the back of the net giving Merrimack their first NE-10 Championship in twenty years.

After the championship winning goal was scored, Lucas Rezende said, “my first reaction was to thank God for taking us there we all talked about the plan for us and it was an amazing feeling achieving it. I was really happy for Aasmund who played amazing since being out with an injury for a big part of our season and I was really happy for Coach Martone, we knew it would mean a lot to him and it was good to bring him that. He puts a lot into the program that a lot of people don’t see. I’m glad we got to give him that trophy, he got us there.”

This game was historic in more ways than one for the Warriors as with their 16th win of the season, they tied the school record for most wins in a single season. To go along with this, Josue Ruiz Maya was named the MVP of the NE-10 Tournament and Aasumnd Joedahl was named to the All-Tournament Team along with sophomore Sergio Martinez.

“I believe there is no ceiling for us, we can go as far as we want. We have a great group of guys who are really driven from the freshman to the seniors and it’s exciting to see what will come next.” This quote from Lucas Rezende ties together the feelings of the Merrimack soccer team at the moment. They are confident and hungry moving into the Tournament and who knows, maybe the NE-10 won’t be the only championship they win this season.