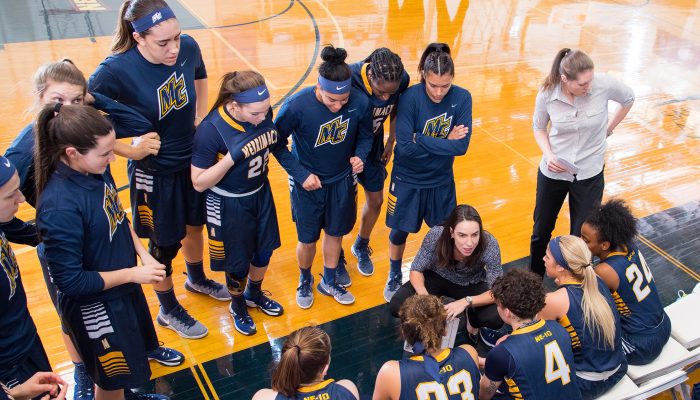 It’s finally that time of the school year where we see the return of college hoops. One thing that students at Merrimack College can look forward to is the Women’s Basketball team.

In that game, two players that really stood out for Merrimack were Lindsay Werner and Karlee Alves. Werner put up 20 points in the game and Alves put up 10 rebounds and 6 assists.

Women’s Basketball coach Monique LeBlanc was pleases by the team’s first win and said, “It’s really great to see a young group of talented women that all share the same love, compassion and teamwork that is incorporated into this sport. I am also glad to see all of my players form such great chemistry with everybody’s different strengths and abilities. I am very proud of my team with our first win of the season and I can already tell that we as a team are going to achieve great things this season.”

Even after a good first win, the team knows they still need to make improvements to accomplish their goals. Senior captain Cecilia Reyes talks about what she thinks the team needs to improve on if the team wants to achieve great things this season.

“I felt that overall we as a team did well against Georgian Court, but I had noticed that our offense needed some work for everyone, including myself. There were multiple occasions in the game where we could have had the upper hand in scoring points, but for some reason, I felt that we could not connect. As a team, we need to work on our consistency with trying to set up usable plays in the midst of fast breaks and misplays on the opponent for defense. During the game, we did come up with some good plays that were generated from our mistakes, but in the long run we as a team, including myself, need to be more productive in times where things seem unbalanced.”

The team’s next game is on the road against Assumption College, a rival that this team has had trouble with in the past.

When asked about the tough match up, junior Lindsay Werner said, “As a team, we need to definitely boost each other’s confidence levels. I understand that we already had fantastic chemistry as it is , but we are going on the road and sometimes that can take a toll on the team. We just need to clear our minds and mentally prepare ourselves for this game. We have been playing really well in team scrimmages and our chemistry as a whole as improved since saturday, but we cannot take anything for granted in college sports. Eve to best team in the league can fall to even the biggest of underdogs.”

The Women’s Basketball team look to improve their overall record as the embark on the road against Assumption College.