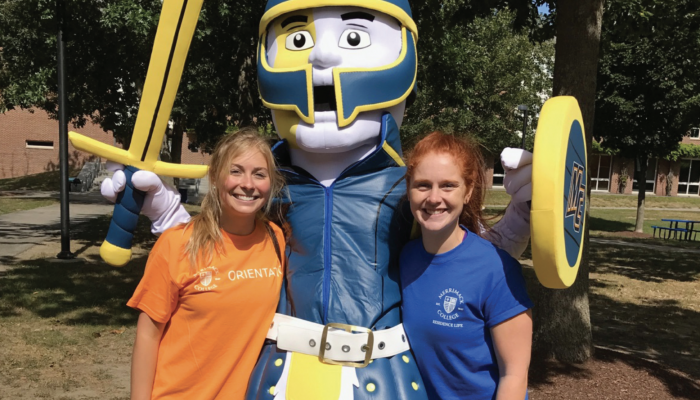 This semester there have been a lot of changes at Merrimack, one of those changes being that their is a new Mascot. Devin Clemons is one of the main reasons why Merrimack now has a mascot. Devin is a junior at Merrimack who in his first two years, felt that “it was weird” that Merrimack was the only school in our conference not to have a mascot. Because of this, he decided to take some initiative and see what he could do about getting the school a mascot. Clemons made a presentation in front of President Hopey and forty other board members in an attempt to prove to them that we should have a mascot. The President loved his proposal and said that he has wanted Merrimack to have a mascot for a while. The President was so supportive of Clemon’s pitch that he told him that money was not an issue when it came to the making of the mascot.

After this, Clemons began to create some sketches of the potential mascot and he brought in his friend to help with them. He then came up with the logo for mascot that he felt would make the warrior pop and represent Merrimack well. After they had made some designs they met with the Athletic Director and the Assistant Athletic Director to discuss which one they liked the best. They had about two or three meetings before the final make up was decided upon. They then contacted some companies that made mascot costumes at the end of last semester. Clemons and his friend had to give up all the designs to the school and the mascot company and they didn’t hear anything over the summer and when he came back this semester Merrimack now had a mascot. Their is no official name for the mascot yet, but people have been calling it Mack, the official name will be announced soon.

Since Merrimack’s mascot is so new, people may not actually know that there even is one. This was just the case for Professor Zager, when asked if he knew about Merrimack’s new mascot he said that he had no idea. Even though he did not know about it, when he was shown a picture he said that he liked the mascot and said that “I can dig it”. He thought that it was important that Merrimack have a mascot. For a name suggestion he said that he thought “Mr Warrior” would be a good name.

How Merrimack’s new mascot will be received is still up in the air. The initial response to the mascot shows that students and a faculty members like the new mascot and everyone can thank Devin Clemons for that.