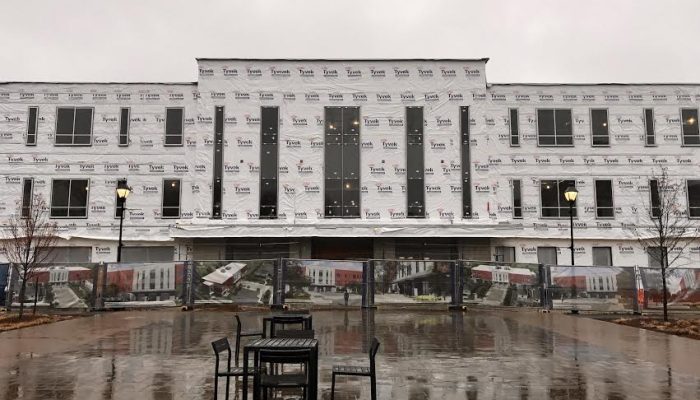 Merrimack began construction on the 49,000 square foot building located in the college’s North Campus. This building will be the new home of the Girard School of Business and will feature advanced classrooms, along with the Mucci Capital Markets Lab and the Financial Capabilities Center. The college hosted a groundbreaking ceremony on Sept. 30 that was followed by a Block Party. This is the first time the college has built a new academic building in almost three decades. It is set to open and be ready for use this summer and for the start of the fall 2017 semester.

Making campus safer one step at a time

Merrimack students who live in Royal Crest were happy to welcome the arrival of a traffic light and crosswalk that was finished before the start of the school year in order to better accommodate students who frequently have to make the trek over route 114. The project cost nearly $2 million and was a little nerve-wracking for some, as it cost the college and the state a pretty penny. Overall, the project proved to be a safer and more time-friendly alternative to getting on campus as more and more students continue living across the street.

Remember that crazy night in the fall when students and faculty on campus were told to shelter in place because of an armed clown who was allegedly roaming the campus? Police officers evacuated Monican and students flocked on and around the outdoor basketball court in panic. Many students claimed that they saw the clown in the woods behind the Merrimack Athletics Complex, but the end of the night proved that the cause of the chaos resulted from a false accusation on Twitter. Although the event was a Twitter hoax, reporters and news stations crowded the campus until students were safe and sound again.

Standing up together after vandalism in O’Brien

On Oct. 15, a party in an O’Brien suite resulted in graffiti being written all over the walls. This was an act of multiple people and included words of obscenity toward almost every racial and ethnic group, religion, sexual orientation, and gender. The words were covered up and Rev. Ray Dlugos stressed the importance of the Merrimack community coming together to stand against this crime to prevent these types of actions at Merrimack in the future. These types of occurrences are typically rare on Merrimack’s campus and although he noted that Merrimack is known for its close-knit student body, things still happen. He also stressed the importance of speaking up if you see something that does not seem right.

On Friday, Jan. 27, Merrimack men’s ice hockey made history and swept the top-ranked Boston University Terriers at the time. As The Mack Report’s Mike McMahon put it, “It is the first time in the long history of the rivalry, which dates back to 1960, that Merrimack has swept a season series.” Junior Brett Seney and Sophomore Michael Babcock were key contributors on the road victory at Agganis Arena.

On the night of Friday, Jan. 27, an incident occurred outside of the apartments in which a non-Merrimack student had possession of a firearm. Merrimack police asked a group of three for their IDs because of an evident open container. They refused to show their IDs and ran off from the police. They were caught and officers found a firearm. Merrimack students were not alerted of this incident which caused some upset by worried students who wished they were notified of the weapon being on campus. The college said they did not send out an alert because the situation had been contained and no one was in danger.

Tom Brady’s absence in the first four games of the 2016 season due to the infamous “Deflategate suspension” did not matter anymore because the Patriots made it to the Super Bowl and defeated the Falcons to become Super Bowl LI champions. The game was considered by many as the most stressful and thrilling game in the history of Super Bowls. The Patriots had a 25-point comeback which is the largest comeback in Super Bowl history. It was also the first Super Bowl to be decided in overtime. At one point during the game, the Pats were losing 21-0 but the team taught us to never lose hope. The Patriots were never actually in the lead at all in the game and went into OT with a score of 28-28 thanks to Julian Edelman’s epic catch, a touchdown to James White, and a 2-point conversion to Danny Amendola. This was the Patriots’ 9th Super Bowl appearance and 7th with Bill Belichick and Tom Brady, earning Brady his 5th ring. The final score was New England Patriots: 34 and Atlanta Falcons: 28.

Women’s ice hockey makes playoffs for the first time ever

The recent establishment of the women’s ice hockey team made great strides this year by making their debut in the Hockey East playoffs. The team’s commitment brought them into postseason, clinching the final Hockey East playoff spot after taking a win over the Vermont Catamounts. Although the team was swept by Boston College in the quarterfinals, the dedication of the team’s sophomore season did not go unnoticed.

President Donald Trump issued a travel ban earlier this year. His original order from Jan. 27 banned citizens from all Muslim-majority countries from entering the U.S., banned Syrian refugees forever and refugees of any other country for 120 days, and allowed people with green cards to enter, but with security checks. The Trump administration did this in efforts to protect the United States from terrorists, but it caused uproar from people all over, including the Merrimack campus for it being unconstitutional. A small number of Merrimack faculty members and students were directly affected by this, but the Merrimack community stood by them and offered support. Some students and faculty members held a protest in the Sakowich Campus Center to stand against this order. There was a freeze put on the original order and it has since been revised in effect as of March 16 and still bars refugees and citizens from 6 Muslim-majority countries from entering the U.S.

Chase Rice to perform at the college’s annual spring concert

Country star Chase Rice and special guest LOCASH will make an appearance in the college’s Lawler Rink on Thursday, May 4 for the annual spring concert event. The spring concert is open to all who are 18+. Ticket sales range from $30 for students, $35 for the Merrimack community, and $40 for the public. Doors close at 7p.m. and the show will begin at 8p.m.