Women’s Hockey Season On The Line In Regular Season Finale 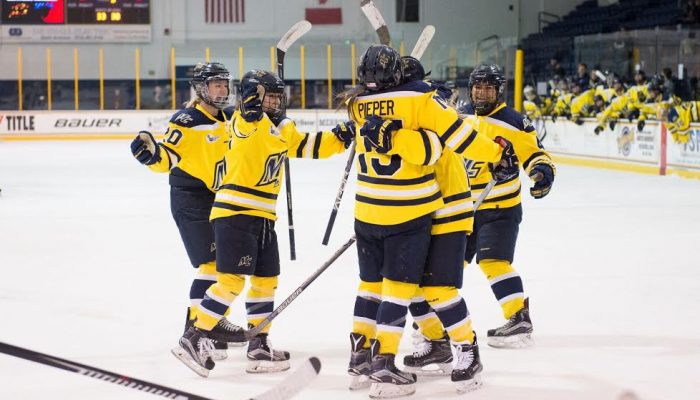 The Merrimack women’s ice hockey team is looking to make playoffs for the first time in program history.

“We want to make playoffs to prove how hard we have worked and how far we have come as a unit,” freshman Chloe Cook stated.

As the Warriors head off to play their last two regular season games against The University of Vermont Catamounts, they are looking to get as many points possible out of these two games in order to put them in playoff position.

“Our team has come a long way and we’ve learned that when we play as a whole and take care of simple plays, then we can accomplish so much,” said sophomore, Jessica Bonfe. “I know our team is great enough to beat any team.”

The last time the women’s ice hockey team saw Vermont this season was on January 3rd and the Warriors came out on top with a 2-1 victory in overtime at Lawler Rink. The Warriors have taken time to review the last game against the Catamounts and have analyzed their style of play to determine what they can improve on for the next two games against them. A key area the Warriors plan to focus on through out the game is adapting to faceoff plays.

“We came in not underestimating them but also not treating them like they were better than us. They have an aggressive forecheck, which forced us to think and react much faster, to make plays a lot quicker.” Cook explained.

Cook concluded that, “going into the game, we know they’re a hardworking team and they have some size and speed, so we know that we need to think fast. We know their style of play now and we are ready to compete for the final playoff spot.”