Potential Replacement Coaches For The Bruins 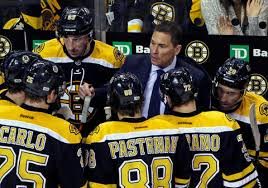 On Feb. 7, the Boston Bruins fired head coach Claude Julien. Julien was the B’s coach for a decade and put up many accomplishments, like winning the Stanley Cup in 2011, winning the Jack Adams award, winning the President’s Trophy, becoming the winningest coach in Bruins history, and that is just the beginning of the list, as he will be regarded as the greatest coach in Bruins history. Julien was always considered to be on the ‘hot seat’ during his time in Boston, but he always kept up his winning ways no matter the doubters.

This season was different though. Management is not run by the smartest apples, who believed Julien was the main problem on a team with little-to-no talent, an overworked starting goalie, and other problems, not brought upon by head coaching. Julien deserved to be treated better, but nothing can be changed now. It is time for the B’s to look for a new head coach while Bruce Cassidy takes over for the time being.

This is a list of three free agent head coaches that the Bruins should consider to fill the vacancy.

Jack Capuano: Former New York Islanders coach, Capuano is the most recent firing on this list. He was let go last month after his team put up a 17-17-8 through the first part of the season. Of course this record is inexcusable, and since Capuano was hired as full-time head coach in the 2010-2011 season, he went 227-192-64 in 483 games. His team made the playoffs three out of the six years he was at the helm, including making it to the second round last season.

The main reason the Islanders fell so far during Capuano’s time this season was because he lost two of his best players, Kyle Okposo and Frans Nielsen, to free agency over the summer. That will really kill a team, especially when you have nobody to replace your stars. Capuano might not be the best fit for the Bruins but if the B’s have a vacancy over the summer, he is one of the more qualified coaches out there.

Gerard Gallant: Gallant led the Florida Panthers to an Atlantic Division title last season and it turned out to be one of the best years in franchise history. The Panthers put up club records of 47 wins and 103 points in the standings. Things were looking up for Gallant and the Panthers, having bright young superstars and one of the greatest players of all-time, Jaromir Jagr, helping teach them. Gallant was nominated for the Jack Adams Award at the end of last season.

New management took office over the summer and changed everything. The jerseys changed, the demeanors changed, and longtime GM Dale Tallon was removed from his position as general manager. Gallant was the only constant, but not for long. He was fired on November 27, after a 11-10-1 start to the season. Hockey analyst Don Cherry dubbed the let-go as ‘the worst firing in NHL history’. Gallant deserved better, just like Julien, and he will find a job soon so the B’s better have their eye on him.

Bob Hartley: The coach on this list who has been out of commission the longest is former Calgary Flames head coach, Bob Hartley. The Flames were only his most recent job as he has coached elsewhere including the Atlanta Thrashers, where he was the winningest coach in the franchise’s short history, and he has won a Stanley Cup with the Colorado Avalanche in 2001.

Hartley definitely has the most experience on the list. He coached the Flames for four seasons, all of which he was coaching young players and developing them. He won the Jack Adams award in 2015, the first in Flames history, but was fired less than a year later. He is the most experienced but may not be the best coach for the Bruins.

Any of these coaches could be swiped up by any team with a vacancy, including new franchise, the Vegas Golden Knights. All three will be seriously looked at by the new team.