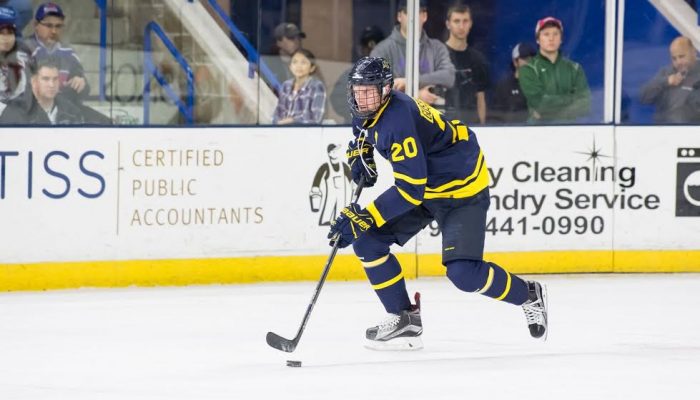 The Merrimack College men’s hockey team is heading down the homestretch of the regular season with the playoffs on the horizon. With only four games remaining, two at home and two on the road, the Warriors are right in the pack for a chance to host in the first round of the Hockey East playoffs.

Coming off last Friday night’s 6-3 win at Boston College (this was for the first win at BC since 1997) and Tuesday night’s 3-0 win against UMass Amherst, the Maine Black Bears are at Lawler for two starting tonight at 7:00p.m. The Black Bears come into the weekend with a 4-13-1 record, good for 9 points and 10th place in the current standings. Senior Hampus Gustafsson recorded 5 points last Friday (3 G, 2 A), and he will be a player to watch this weekend.

When asked after a recent game on the team’s direction, Gustafsson said, “It’s nice to know you can beat a team any time but it is all about us. We just have to prepare and play well like we have been and not take any team lightly.”

The Warriors are now holding onto the 4th and final spot to host in the opening round of the playoffs, but that isn’t going to stop them from to grabbing a very important 4 points this weekend and ensuring it becomes possible.

“The Hockey East is hard enough as it is. The harder you make the road in the playoffs the less likely you are going to get where you need to be. So right now for us it is all about getting points,” said Warriors head coach Mark Dennehy.