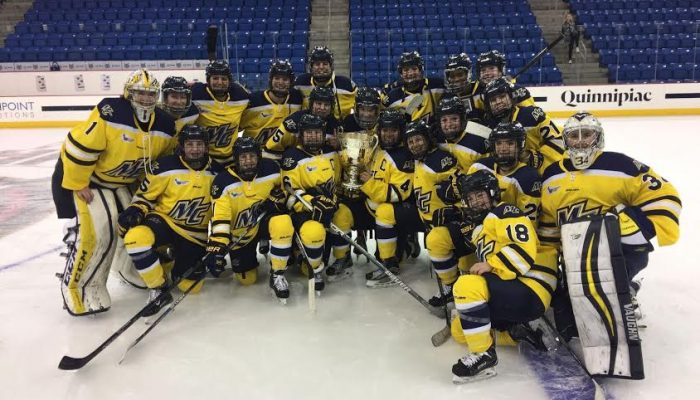 The Warriors played and defeated Quinnipiac in a shootout in the semi-final game.  Coming into the game, QU was #8/9 in the country.  Sophomore Paige Voight contributed with the only goal in regulation and a goal in the shootout to help Merrimack advance to the final game against Yale.

Merrimack defeated Yale 4-3 to win the Nutmeg classic behind two goals from Katelyn Rae.  Rae also scored the fourth and final goal for Merrimack which put them up 4-0, and it would end up being a big one.

In the third period, Yale scored three unanswered goals making Merrimack sweat, but in the end the Warriors would pull out the 4-3 win behind 34 saves from goaltender Léa-Kristine Demers.

This would be Merrimack’s fifth win of the season and a big step forward for this program.

This was Merrimack’s second consecutive season playing in the Nutmeg Classic.  Last season Merrimack lost to Yale in the first round by a final score of 3-1.

Sophomore Jessi Kuhlman said the key to success was that they were having fun out on the ice.  “Everyone was a part of the win and our coach was really putting emphasis on our attributes to keep working hard and playing “Warrior” hockey.”

Sophomore Jess Bonfe attributed their conditioning to their success: “We’re in much better shape this year because of our conditioning and we work out in on the ice and in the weight room.  It plays in because we are able to keep up and even out skate some teams such as Yale and Quinnipiac.”

Sophomore Maddy Morey said, “the whole team was on the same page and supported each other no matter what” and that “It showed us how good of a team we can be when we all support each other and work together. It definitely was a confidence boost.”