Stuhr’s Career For the Record Books 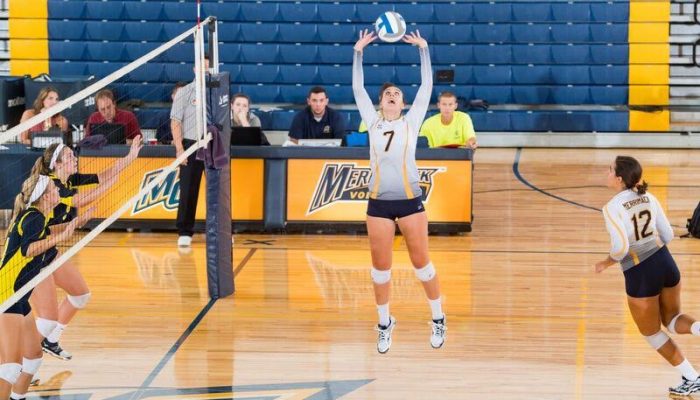 History was made when the Merrimack College women’s volleyball team traveled to face the College of Saint Rose on Nov. 5. In the first set of the heated NE-10 matchup, Tara Stuhr recorded her 4,000th career assist as a Warrior. The volleyball team would go on to win the conference matchup 3 sets to 1 after coming back from a 16-11 deficit in the fourth set.

Stuhr is a senior captain of Merrimack’s women’s volleyball team. Before coming to Merrimack, she began playing volleyball in her hometown of Huntington Beach, California.

“I first got into volleyball when I was about eight years old through summer beach volleyball camps. I loved it because it was a faster paced game, so I just continued to play as I got older,” said Stuhr.

She was a four year member of her Huntington Beach volleyball team before coming to Merrimack where she has been a four year member of the volleyball team. Over her illustrious career she has received many awards including Northeast-10 Rookie of the Year, Northeast-10 All-Conference Second Team, Northeast-10 Conference Third Team, among many others. She ranks second in program history in assists after becoming the second athlete in the program’s history to surpass the 4,000 assist mark.

“It felt really good and rewarding. I couldn’t tell you what the exact 4,000th assist was or who it was set to because it was in the middle of a game. However, in between games 1 and 2 at Saint Rose my coach congratulated me, and I was able to celebrate with my team in the huddle. Then, they made an announcement at the game, which was even more rewarding. To be honest, it was not a specific goal of mine. Assists will come with wins and losses, so I try to strive to do whatever I can to just make the team better. I didn’t have too many individual goals this year, but a big team goal I wanted to achieve was to make it to the NCAA tournament,” said Stuhr on her 4,000th assist.

Although the Merrimack volleyball team did not end up qualifying for the NCAA tournament, this team will always be remembered by Stuhr. “This team will always be very special to me because it will be the last Merrimack team I will be a part of. This year we had a lot of fun on and off the court, which has made this year especially memorable. I couldn’t have asked for a better team to be by my side for the final year of my volleyball career.”

There is only one game left in Stuhr’s masterful collegiate career, but she still has a team goal.

“For the rest of the season, I am just focused on having fun. We didn’t make the tournament, which was upsetting, but I just wanted to focus on having fun and going out on a positive note.”

Stuhr found a love for volleyball as a child and that passion for the game led her throughout high school and has paved the way for her record collegiate career. That childhood passion for the game can still be found in her. “Volleyball will always be a part of me. I grew up playing the sport and it has taught me so much, so I will probably never stop playing.”