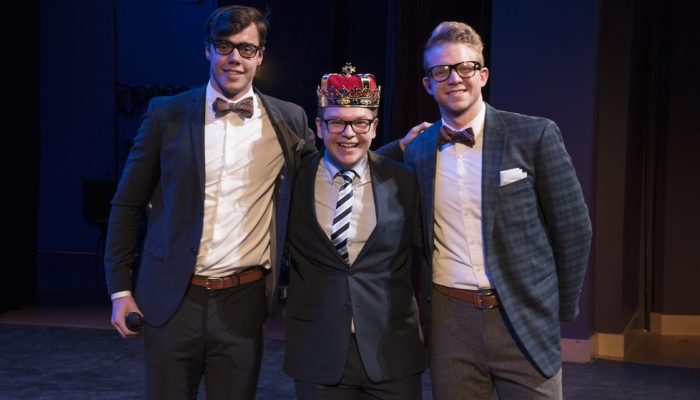 On Thursday Nov. 3, five students took to the stage at the Rogers Center for the Arts to compete for the title of Mr. Merrimack 2016. Family, friends, students, and alumni packed the auditorium for two hours of talent, talk, and laughs in support of the show.

The five young men kept the crowd thoroughly entertained for the evening as they began by strutting their stuff in the first event of the night – swimwear. This was followed by the talent portion of the competition which showcased the diverse and musically-gifted side of the contestants.

The event included a choreographed dance number to Megan Trainor’s “Me Too” by Santoro, a reenactment to the closing scene of “High School Musical 2” for O’Neil, and singing performances for both Nerkowski and Hanson. Last but not least, Olszewski really got judges talking with the performance of his original song played on the piano. Santoro, who heard the performance from backstage complimented his opponent. “It was like a love ballad. It was beautiful. I wanted to cry.”

The final two events included formalwear with escorts and concluded with a Q & A session for each contestant. Asking the questions were Class of 2018 co-hosts and best friends Alfred Larsson and Collin Delia, who were crowd favorites, according to sophomore Brianna Mahoney who was in attendance that night.

“Alongside the bromance of the hosts, I mean wow, I’d say my favorite part was Nerk Nation throwing out candy to the crowd. It was so exciting…Really livened the crowd,” said Mahoney said.

Performances by the Dance Club, Dance Team, and Mackapella also helped light up the night in between events.

“I had so much pride in my school right there because there were just so many people and so many of them were so talented. It was kind of overwhelming. They’re just so awesome. Just to be there and to see it made me proud,” said Salemme.

It was their tough decision that lead co-hosts to crown Santoro as Mr. Merrimack 2016. Santoro, a Medford, Mass. native and Business Management major, could not be more immersed in the Merrimack College Community. He stands out not only in the classroom, but on the leaderboard as well. He is an orientation coordinator, First-Year Experience Mentor, and a resident advisor. When he’s not on duty, you may even find him riding by on the golf carts directing a tour for his Student Ambassador position.

“It was a really fun evening planned by the junior class council. The judges were, without a doubt, the most entertaining part of the show,” said Santoro.

Becoming “Insta-famous” post-show was just an additional perk Santoro found to accompany his new-found title. He hopes to take part in Mr. Merrimack again next year, but rather than on stage, behind the judges’ table.