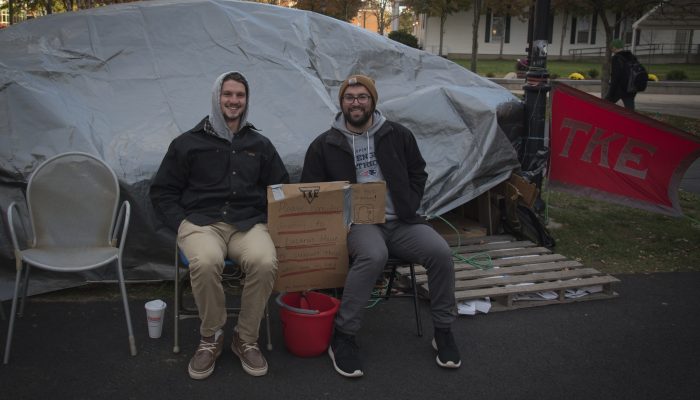 For the last 10 years at Merrimack, the fraternity Tau Kappa Epsilon, also known as TKE, has been participating in TKE in a Box. TKE in a Box is an event put on by the brothers to raise awareness and money for the homeless.

Every year, the brothers build a homeless shelter out of pallets, cardboard, and a tarp which provides minimal protection from the elements. The brothers stayed in the box for 24 hours a day from Sunday, Oct. 22 to Friday, Oct. 28.

“The event not only raises awareness for homelessness, but also to raise money for it. All the donations that were collected are going to the Lazarus House in Lawrence, one of the biggest shelters in Lawrence,” said junior Cameron Desjardins.

The brothers take turns camping out in the box in since they cannot all fit.

“Over the course of a week, there is always at least one brother, but typically a few, manning the box and between 3-5 members sleep in it per night,” said senior vice president of TKE Thomas Drover.

In the past, the fraternity has only raised a few hundred dollars each year. However, in since there has been an increased size in the chapter, Drover believes this has increased the motivation of the brothers to have made such huge strides in raising more money than they have in years.

“Last year we raised a record $1,300 which was far more than we ever have. This year we set our sights on $1,500. We made the shelter bigger so more brothers could occupy it and tried to spread the word and hype it up as much as possible,” said Drover.

Because of how hard the brothers worked, they were able to to raise just around $2,000 this year.

Drover explained how humbling and eye opening this experience was. “The amount of broke college students that are willing to sacrifice their morning coffee to donate a few dollars to a good cause is heart warming. Whether the donation was $0.50 or $500 we thank everyone that helped support our organization in the fight against homelessness.”

The brothers seemed to have picked the first coldest week of the semester and still managed to raise more money and awareness than ever.

“There were nights where the temperature dipped below freezing and made for less than ideal living conditions. Though it was tough, we always knew in the back of our minds that we would have a warm dorm room to which we could return,” Drover said.