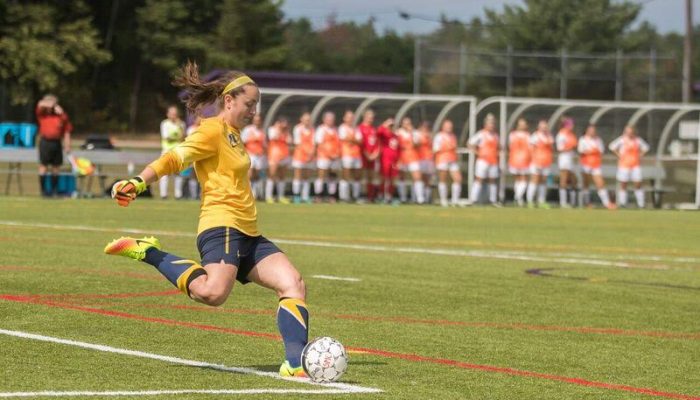 Meehan’s game statistics as of her October 15th game are impressive. She is leading the conference for number of saves with 89 saves and she is second in save percentage with 85.6%. She has had five shutouts so far putting her at second in the NE-10 conference. At her game against Southern New Hampshire University on October 4th, Meehan set her career high saves this season with 12 saves.

Another accomplishment of Meehan’s is that she was named Fuddruckers Women’s Athlete of the week on October 11th for her performance in the previous week.

Meehan is a junior studying Sports Management at Merrimack and is in the Honors Program. She greatly values her studies on top of her soccer career.

Meehan notes, “So far I feel as though I have been playing some of the best soccer I’ve ever played.” She takes pride in the fact that people tell her she is a “solid shot stopper in net.”

Although she is having an outstanding season, she says, “The more saves I make, the more confident I am. With that being said, I still have work to do.” 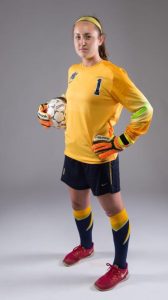 For Meehan, goal kicks have always been something that she needs to work on to improve. The leg strength is there but she lacks proper technique. “I am constantly working on my technique to perfect my goal kicks so they will begin to consistently reach closer and closer to the midfield,” she says.

As a goalkeeper, she said that her communication is important and notes that she has improved that. It is important for goalkeepers to communicate with teammates because they are the players that have the whole view of the field and can easily see what is going on. She has been able to step up as a leader and communicate better during the game with her team.

Off the field, Meehan has a number of inspirations in her life. Her inspirations have always been her mom and dad. She says, “Living three hours away from Merrimack, they do their best to make it to as many games as possible.” She can always count on a hug and constructive criticism from her dad right after her game and her mom reminds her to stay confident and never give up.

Another inspiration is her grandmother who passed away from Alzheimer’s in 2012. She has dedicated the remainder of her season to her by writing her name with a heart on her tape before each game.

Meehan says that overall her team is playing well this season. “Every one of us has contributed to our success in one way or another, whether that be through goals, assists, or winning balls in the air,” she says. She continues, “With a positive attitude from everyone on the team, we are taking it one game at a time with the ultimate prize on post season.”