Home > News > Who are Merrimack Students Voting For?

Who are Merrimack Students Voting For? 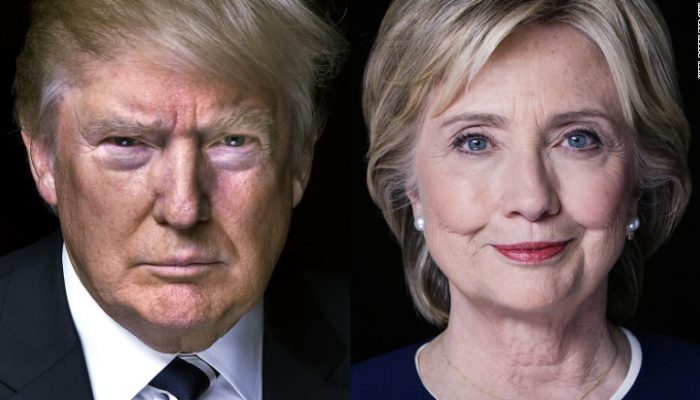 On Nov. 8 Americans will elect the 45th President of the United States. With all the controversy surrounding the upcoming election, we asked Merrimack students if Donald Trump or Hillary Clinton will be getting their vote.

Trump is an American businessman and nominee for the Republican party. His main political views on issues in the United States include enforcing immigration laws, supporting the second amendment to keep and bear arms, and making America safe again by destroying radical terrorists.

Trump’s running mate Hillary Clinton is the nominee for the Democratic party. Her main political views on issues in the United States consist of equal citizenship for immigrants, access to reproductive health care for women, protect responsible gun owners’ rights, and keeping guns away from those who shouldn’t have them.

In an survey of about 50 Merrimack students, many agreed that Trump would be beneficial in moving the American economy forward and stated that they were ready for a change in American government. Here are what students said:

“I’m voting for Trump because I do think our economy needs to be better and he knows what to do in businesses. I think he will be able to help us, whereas Hillary would create more debt with her idea about college debts. Also my dad is voting for Trump so I ultimately have to side with my dad.” #stickwithyourfamily – Nora Pance ’18

“I’m choosing Trump because the government’s trust rating is below 10% for the first time in history, we need someone not associated with government to gain trust in government again.” – Perry Kulaga ’17

“I’m voting for Trump in the upcoming election because Hillary has been in politics for 30 years and has failed miserably at every position she’s ever had.” – Ben Flynn ’19

“At the moment I’m leaning more towards Trump. Although he says absurd things, I think our country needs a strong leader and someone who is ready to take a stand against the economy. Trump is someone who knows how to turn an economy forward. But on the downside, Trump has many skeptics and that may cause hate towards America from other countries.” – Pat Nevins ’19

When asking Clinton supporters at Merrimack why they’re voting for her, many felt as if she had more experience in politics than Trump. Some also expressed their support by bringing up her political policies toward women in America. Here are some who are standing behind Clinton in the upcoming election:

“I favor Hillary Clinton because I am left-leaning and feel she is more intellectually and emotionally capable of running this country than Donald Trump.” – Brianna Butler ’17

“I favor Hillary because she has more political experience, whereas Trump is an entrepreneur turned politician.” – Joanna Gormley ’18

“I am voting for Hillary because although she may have negative attributes, I believe she is the best candidate in keeping our country protected and productive. From my point of view, we are too advanced as a country to elect a rude, racist, and inappropriate president. I do not believe Donald Trump stands as an example of what Americans should trust and admire.” – Emily Daley

“I am voting for Hillary Clinton. I believe that she will make great changes that have been needed for years. Her policies are not just for women, children, and families. She is inclusive and fully aware of all situations people in our country deal with. Equal pay for women and support for the LGBT community are far due for this country and she is a great role model for all people. Donald Trump has been saying vulgar things that are not true and we see when Hillary Clinton and Donald Trump are onstage together that she is the bigger person and sets the example this country needs.” – Nora Whouley ’17

The conflict and choice among Merrimack student voters is evident. Even after three heated debates, many students are still unsure of who will be getting their vote come Election Day. When asking Merrimack students who they’re voting for in the upcoming election we found that many students are not voting in general. Many people are so unsure of the two candidates that they have decided not to vote. They believe that both candidates are unsuitable to be the president of the United States.

“I honestly am an undecided voter. I’ll probably vote 3rd party because all these candidates are awful.” – Eric Uhl ’19

“I honestly still don’t know who I am voting for and I don’t think I will be able to decide until the day of, you know?” – Andria Auger ’18

“I am not voting for either of them because their motives are complete opposites and there is no happy medium between them so it’s hard to believe that the nation will not be split after one of them becomes president.” – Ally Sanko ’18