Home > News > The Mack was Packed for Midnight Madness

The Mack was Packed for Midnight Madness 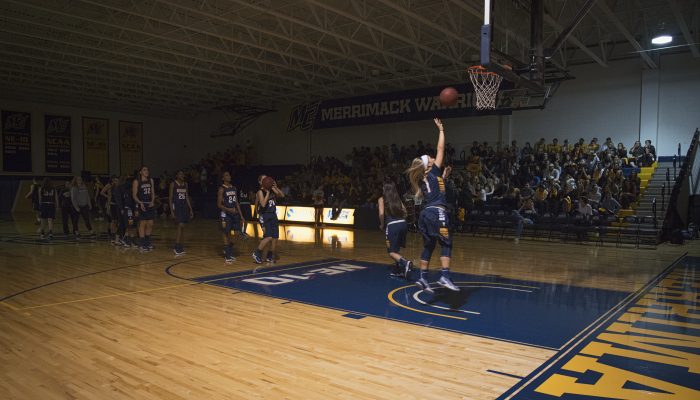 Merrimack kicked off the much anticipated winter sports season for the Warriors as the Men’s and Women’s basketball teams took on Hamel Court for the annual Midnight Madness celebration on Oct. 13.

With over 1,000 students in attendance sporting their new “Pack the Mack” free giveaway T-shirts, school spirit was at an all-time high from the moment people walked in the doors. There, they were addressed by first-year Men’s head coach Joe Gallo and Women’s head coach Monique LeBlanc to start the night and get not only players, but fans excited for the upcoming 2016-17 season.

The first performance of the night featured the Merrimack College Cheerleading Team that segued into the lively walk out of the Women’s Basketball team to their song and dance of choice. Each player was individually welcomed by a raving crowd as they made their way out of the tunnel and onto their home court for the next few months.

This was senior Marisa Rainey’s favorite part of the night.

“They were definitely better than the boys,” said Rainey.

A statement supported not only by Rainey but also by a show of applause from the crowd as well.

Despite their lack of dance moves, the boys were not shy of showing their excitement either. They entered the gym to the welcoming support from their peers who seemed to be feeding off of their energy.

“Midnight Madness is getting better and better every year,” said Calzonetti. “We love the support from the student body and faculty. It’s not just about the basketball program, but about the Merrimack family supporting each other.”

The Merrimack community saw this support first hand as students and teachers took to the court to join the players in a series of competitions. Among the games were a Knock-out challenge, a shoot-out relay, and a half-court shot challenge which unfortunately saw no winner. Calzonetti did however take home the proud title of the 2016 Knock-Out winner.

Representing the teachers was Assistant Professor of Psychology Laura Kurdziel who has known Coach LeBlanc since attending Bucknell University as a grad student where LeBlanc was the assistant coach.

“I taught her how to salsa dance! So it was my honor to show my support for her team that night!” Kurdzeil said.

When asked about her favorite part of the night, Kurdziel noted seeing so many of her students out of their element.

“I think sometimes it’s easy to see our community only in certain contexts. I sometimes forget that my students have these very busy and incredible lives outside the classroom, much as my students often only see me as a professor, not as a person,” said Kurdziel. “These types of events allow us to recognize and celebrate Merrimack as a community of well-rounded people. Plus, the whole event was just a lot of fun.”

The Dance Team and Dance Club were also in attendance, both with energetic, crowd pleasing performances. The Dance Team was first up with their debut to Nicki Minaj and then were followed by the Dance Club whose routine featured an impressive human wave comprised of over 12 girls.

With game day less than a month away for both teams, Midnight Madness sparked the excitement needed for the Warriors as they started their first in-season practice last Saturday.

“It should be a big year from both teams and we are just excited to see what’s in store,” said Troy McLaughlin, Men’s Basketball sophomore.