Home > Entertainment > ‘Creature’ Sets The Stage in the Rogers Center

‘Creature’ Sets The Stage in the Rogers Center 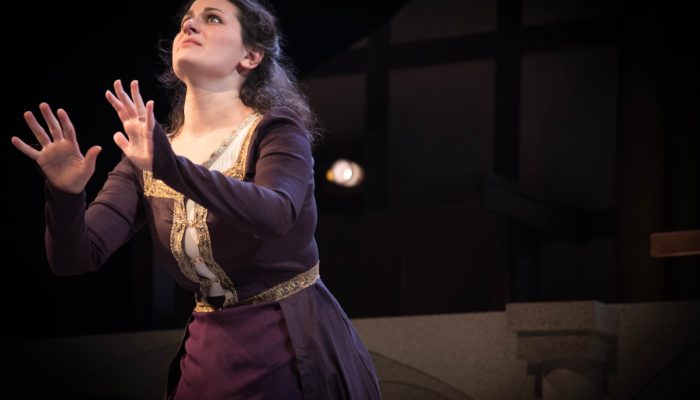 On Thursday Oct. 13, the Department of Visual and Performing Arts presented “Creature,” written by Heidi Schreck and directed by Kathleen Sills. The play is based on a true story and is centered around Margery Kempe, who had visions of the Devil and was visited by Jesus after the birth of her first child.

The play’s theme centered around religion and the production design was set up in two levels. The top level of the stage was set up as a house and the ground level of the stage’s floor was a church. The door in the house was not only a door, it was an organ for the church scenes. In each scene, there were candles glowing away which made it perfect for the theme and storyline.

“The production of ‘Creature’ was visually beautiful and the acting was incredible,” said senior Megan Bouchard.

Margery Kempe was played by senior Mick Lonati, who did a phenomenal job taking on the role. Junior Olivia Lombardo played the Nurse.

“I read the script over the summer and saw that it was different from anything else I had been in,” said Lombardo.

The sound effects were spot on because each scene had a sound effect that went along with the plot. For example, in one scene, Margery was in a church praying and all of a sudden thunder and lightning caused the church to collapse and the church beams that were hanging from the ceiling fell.

That particular scene was done so well because the lightning and thunder in the background made the scene terrifying as there were crashes everywhere on stage signaling the collapse of the church. Further, the last scene’s sound effect was a fire crackling in the background because the town was on fire while Margery and her husband, John were in the ruined church.

The storyline was hard to follow and very confusing at times even though the events of the play happened in order.

“The acting was great. It was less spooky than I expected and the ending was confusing,” said junior Emilia DeWyngaert.

The acting in “Creature” was very good as the actors did not mess up their lines, but the actors could have annunciated their words better and could have been a little bit louder.

The play was advertised throughout campus with posters hanging up on walls in academic buildings and the Sakowich Campus Center.  However, the posters should not have had the Variety Magazine quote indicating that the play was spooky; it was misleading as the whole play was about a woman’s journey to religion. Margery Kempe’s visits from the Devil were not spooky at all.

Even though the play was based on a true story (Kempe’s period of her life when she had the visions from the Devil and God), it was very rushed and there was so much material packed into an hour and a half long play.  With that being said, with a lot of information in the storyline, it made many scenes unclear when trying to interpret the main points of the production.

Junior Emily Bertolami said, “There were moments that I didn’t know what was going on.”