Top 5 Sports Moments of the Year 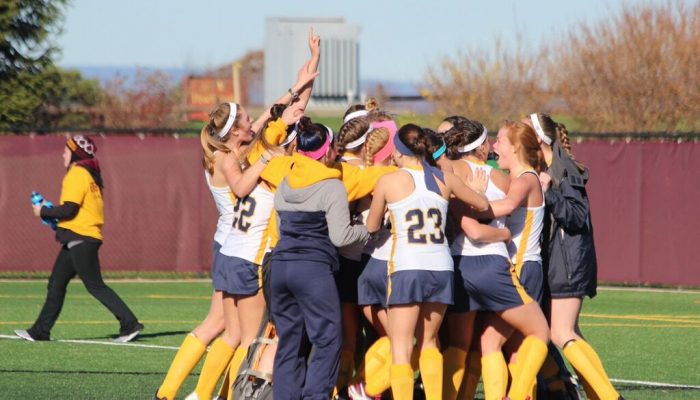 After losing in the Final Four in the 2011, 2012, and 2013 seasons, the Merrimack College Women’s Field hockey team finally broke through after defeating Stonehill College in the 2015 Final Four. Junior Nicole Bradley potted the game’s only goal as the Warriors went on to win 1-0. The Warriors would face East Stroudsburg in a title game that would go right down to the wire. The Warriors would lose 1-0 in heartbreaking fashion in overtime on a penalty stroke, but despite the outcome the season would still stand as an historic one for the program.

In the first game in program history, the Merrimack College’s Women’s Hockey team would go down to the wire with St. Cloud State in front of a record-sized crowd. Despite ultimately falling to St. Cloud 6-4, the night was an historic and meaningful one for a program. The program would make even more history two weeks later when they defeated the University of New Hampshire by a score 2-1 for their first ever win which would be one of many memorable firsts for a program that has an exceptionally bright future ahead of them in the coming seasons.

Men’s basketball senior Jarvis Solano joined elite company this past season when he netted his 2,000th career point against Southern New Hampshire University on February 13th. Solano is the 6th player in program history to be able to reach that milestone and only the third player to have 2,000 points and 500 rebounds.

Women’s Golf wins back to back NE-10 Championships

After winning the NE-10 championship in the spring of 2015, the Merrimack College Women’s Golf team would repeat as champions winning the 2015 Fall NE-10 Championship. The squad finished with a score of 638, which was more than good enough to defeat Franklin Pierce (689 points) and Le Moyne (708). Asides from the team success, Alessandra Ricigliano finished as the individual champion while Krystal Knight garnered outstanding rookie honors.