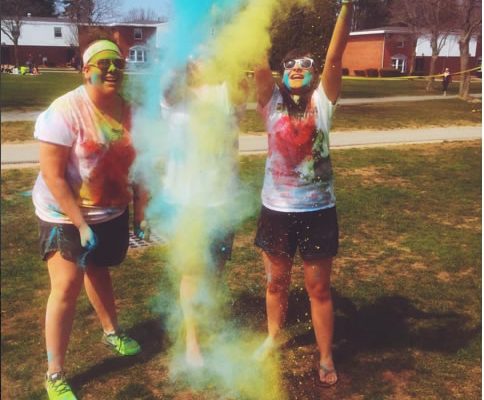 The Hindu Festival of Holi or Festival of Colors has been run for the past three years by the Center for the Study of Jewish-Christian Muslim Relations (JCM). This year collaboration expanded past InterFaith Alliance Student Organization on campus but added Office of International Programs, Religion and Theological studies, and the Honors Program. Merrimack has this festival every April, this year’s celebration occurred on Monday, April 18th and is actually an ancient Hindu celebration. The Hindu Festival of Holi that is meant to signify the end of winter. This is a fun event for students, faculty and staff to attend while drenching one another with colored powders. Samantha Bruno, Graduate Fellow for JCM says, “The weather was fantastic, so we were able to draw in some people who were sitting on the quad. We also had a variety of students, staff, faculty, and graduate fellows, which rarely happens.”

Bruno continued to say, “My students [JCM studies] focus more on intercultural awareness, so this is one of the events that promotes a world culture that we don’t come face to face with, and it’s fun and engaging, so it means a lot to them.” This celebration is meant to represent the victory of good over evil with vibrant colors everywhere says the JCM Center. This event had music, refreshments, and food donated by Bollywood Grill for everyone to enjoy that attended.

Multiple attendees including graduate fellows and undergraduates said that everyone was having such a great time including running around, smiling, and laughing just enjoying the day.  Angela Romano, Graduate Fellow, said that as a grad fellow it was awesome to be able to run around with some of her FYE students while throwing color at each other. Romano had attended another Holi Festival of Colors in the past during her undergraduate degree at Quinnipiac, their event was much smaller and low-key compared to Merrimack’s event.

The event used to be located on the Austin Field, which are now our North Campus dorms for resident students. The Festival of Colors was definitely more successful due to the move of locations. The O’Brien quad tends to get more traffic throughout the day being surrounded by all residential buildings as opposed to academic ones. Samantha Bruno, Graduate Fellow, said that over the course of the three hours she would guess around sixty students came and went. She also mentioned that her office ordered 150 lbs. of colored powder and in the duration of the event everyone went through all of it. Mackenzie Rice said, “Overall, this event was very fun, energetic, and uplifting! It was fun to spread positivity with friends and strangers.”

When asked if there was anything else Angela Romano, Graduate Fellow, wanted to say about the event she said, “I had an awesome time; if you’ve never been…Go! You won’t regret it. It’s like the color run without the running, what could be better?!” Holi Festival of Colors is on the plans for the next school year, 2016-2017.