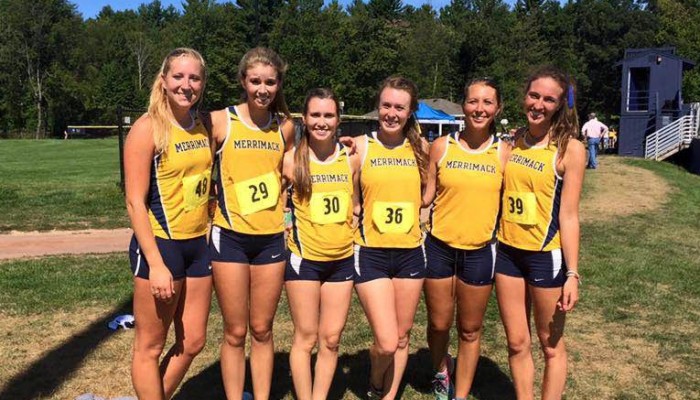 “Five years ago we went to New England’s in my station wagon, now we need a bus and two vans just to get there.” Mark Connolly, Assistant Track and Field Coach spoke of the immense growth of a program that started as just eight walk-on volunteers in 2010. Now, the Track and Field team is comprised of nearly 100 male and female athletes with nationally ranked talent and even an Olympic qualifying female sprinter, Carly Muscaro. However, with the lack of a physical track facility present on campus, it is wondered how Merrimack’s coaching staff is able to continually recruit such great athletes.

Connolly explained the lack of a track is no kept secret in the recruiting process, but rather than dwelling on this factor they choose to sell Merrimack’s other facilities such as access to a division one weight room and division one training staff thanks to Strength and Conditioning Coach, Michael Kamal. Interestingly enough, Track and Field coaches have been known to recruit with other sports, finding much success with Men’s Football and Women’s Soccer. “When I recruit, I talk about school first. I try to let kids know we care about their overall success first.” Connolly says the Track and Field coaching staff preaches academics first, then community, and then track.

For junior distance runner Sarah Duffy she was sold on this deal. “I liked more things about Merrimack besides just track, so it wasn’t my deciding factor,” she said. For teammate Colleen Englert, she signed with Merrimack not realizing the above factor. When both girls were recruited by Merrimack they were told they would probably see a track during their four years here, but as rumors float and their senior year approaches it is questionable as to whether the school will do so in time. “I came to Merrimack not knowing I would also run track, but once I did I was disappointed that there wasn’t a track to do workouts on. I feel if we had a track myself and my team would improve greatly and go on to do great things in the future,” said Englert. Despite this, Connolly said he usually does not hear much complaining about traveling to high schools in the surrounding area that are generous enough to let Merrimack use their facilities. “Our sport is your sport’s punishment” he joked, so the kids know what they are getting into.

For many, this means three full seasons of athletics. According to junior distance runner Maddi McMullen, if you sign an athletic National Letter of Intent with Merrimack College for Cross-Country, you are usually expected to participate in all three seasons including fall cross country, indoor track, and outdoor track come spring. With such a time commitment one would think these athletes are deserving of their own space, but in reality Track and Field does not even have its own locker room. Instead, they are considered “General Athletics” and share a locker room with other teams categorized similarly such as golf, swimming, tennis, and crew.

Such events never seem to bring down the “vibe” of the Track and Field team here at Merrimack. Connolly spoke highly of their “winning attitude, good work ethic, and support around the team.” With such achievement surrounded around the program it is hard not to keep  heads held high especially with success stories from national title holders John Braga and Carly Muscaro practicing alongside their teammates. Connolly attributes much of the Track and Field’s team success to Merrimack’s facilities, staff, Head Coach Jacky Mendes, and Assistant Coach Pete Early who he describes as “the heart of the team.”