Lifelong Friends Share The Final Chapter of Their Baseball Journey 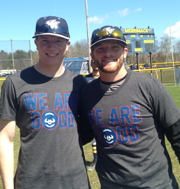 For Pat Florence and Derek Reed, the game of baseball has been much more than, well, a game. It’s been a sanctuary of sorts; embedded in their lives as a source of fun, stress release, competition and camaraderie.

Baseball is what caused them to cross paths in the first place. And although they may have shared a diamond for the final time April 2, the two will forever share a bond built almost exclusively through the sport.

Florence and Reed both came up playing baseball in Lowell, Massachusetts, competing in separate Little League’s on different sides of the city. Each experienced great success as they climbed from one level to another in their respective leagues, earning spots on exclusive travel and AAU teams along the way.

The AAU circuit is actually where they came to know of one another. But during those years they only experienced the game as opponents, never as teammates, the thought of becoming friends most likely never crossing their minds.

Each continued along their separate ways. However a certain buzz started to manifest the summer entering their freshman year of high school as a handful of promising players—Florence and Reed chief among them—were expected to form a sort of dynasty at Lowell High School.

For Reed, LHS was the obvious choice and it was only a matter of time until Florence, the younger brother of two very successful Lowell High athletes, followed suit.

Florence had different plans, though. Rather than follow in his siblings’ footsteps, the kid affectionately known as “Flo” opted to attend Groton School, a prep-school in Groton, Massachusetts. The decision put any hopes of the duo suiting up together on the backburner with both, once again, achieving great things in separate places.

Two years later the opportunity to join forces again presented itself, and this time Florence and Reed took it and ran with it.

“Pat and I first became teammates for Lowell Legion Post 87 after our sophomore year of high school,” Reed told The Beacon. “We played three years for that team, helping them reach the state tournament championship game after our junior year.”

The duo accomplished a lot together during those long summers and it was for that team Florence and Reed really clicked—both on and off the field.

Playing Legion together couldn’t last forever, though. Eventually the college game beckoned and a promising partnership and budding friendship was suddenly in jeopardy.

For Florence, it was Merrimack, for Reed, the College of Saint Rose. And with that their time as teammates came to an abrupt end, save for one summer spent playing for the Chelmsford Merchants following their freshman year.

“College ball is hard to imagine when you’re in high school,” Florence explained. “It seems like a foreign thing so it’s hard to imagine playing with or against anyone. It is always exciting, though, to think (about) where you might end up and I knew Derek would end up somewhere great.”

Coincidentally, Merrimack and Saint Rose are both a part of the Northeast-10 Conference, meaning Florence, an outstanding catcher, and Reed, a stellar center fielder, would wind up taking the field together at least a few more times, even if it was in different uniforms.

The two were sophomores when they went head-to-head collegiately for the very first time, and the feeling of being involved in the same game was a great one.

“The first time Pat and I played against each other, we (Saint Rose) traveled to Merrimack for a Saturday double-header,” Reed said. “Being on the same field with Pat again was awesome, even though we were on opposing teams. Pat was behind the plate when I stepped in for my first at-bat of the day and it felt great to be competing against someone who I have played the game with for years.”

Florence echoed a similar sentiment saying “it was a cool feeling when Derek came up to the plate to start the game as a lead-off hitter and I was behind the dish. There is a lot of mutual respect between the two of us because of all we have gone through prior to college.”

Fast forward two years and Florence and Reed are now playing out their final season of college baseball. And after the two teams’ double-header a weekend ago, it is likely the two have played on the same field for the very last time.

It’s clear, though, that this isn’t the end of their friendship. In fact, it’s likely it only becomes stronger moving forward.

“The Lowell Legion team was one of my favorite teams I have ever played on,” Florence said. “Kids like Derek made it special and the run we went on that year we will always remember. He’s a good kid and a great teammate.”