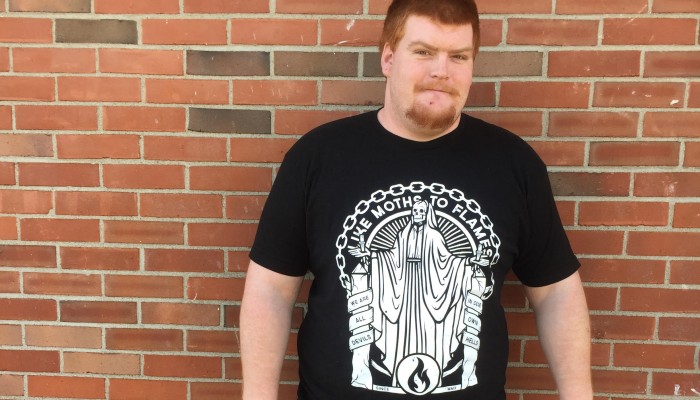 When students come to Merrimack College, they are named “warriors.” It’s a nickname mainly used to describe the school’s athletes. But every student at Merrimack has their own battle and every student has a reason why they are a true warrior. Every edition, The Beacon will talk to a student to find out what makes them who they are and why they see themselves as a warrior.

So what makes you a real warrior? Everyone has a story. Do you have anything you want to talk about first off that makes you, you? What obstacles have you had to overcome?

When I was 19, I struggled with a substance abuse issue and one night I just tried to drink until I died…And I was able to overcome it. I’m from Hudson, Massachusetts, but I grew up in Littleton, Massachusetts, which is just a really small town; everyone knew everything it seemed. A big part of what lead up to this was that I was bullied in high school and I didn’t really fit in. But, thankfully when that night happened, I had a small group of friends who cared about me enough and basically saved my life.

How did your friends help you through it all? And do you have that same support system here like back at home?

They really took care of me all night and called my dad to come help, too. After that, I was six months clean and then I began to feel like I had it under control. I find I can still go to a bar and have a drink and I’m okay. I know my limit. Having those friends really helped me during it all. I also turned to music because that’s always there for me. Other than music, friends were the most important thing to me at the time because having them there was the utmost crucial thing. My roommates this year are so helpful, too and make sure I won’t ever fall back into that darkness.

What kind of music are you into?

I’m into what people call screamo. I just find when I listen to it, it really calms me down. It drowns out everything in my head and a lot of the music is actually so relatable, it talks about real issues like substance abuse.

What lead you up to that point?

I had just failed out of school, I didn’t know what I wanted to do with my life anymore, and my whole world just felt like it was falling apart, so I turned to alcohol and was drinking way too heavily. I have really bad ADHD so I have every issue and quirk that comes with it, so I will have spans where I’m very depressed. It was hard because I had thought my parents were ashamed of me because I’m one of two kids and my sister was okay, but they always saw me as the child who had “more potential.” I got great grades and had a football scholarship, so when I failed out, I felt like they were really disappointed when it seemed everything was falling apart.

When you dropped out, were you at Merrimack?

No, I had originally gotten into Merrimack, but I ended up going to play football in Ohio. But when I dropped out and everything sort of fell apart, I ended up reapplying and coming here to Merrimack.

So, what year are you now?  And how have you been doing since?

I’m a first semester junior. Honestly, I still have my demons, I still will have a drink now and again, but I’ll never allow myself to get as bad as I did that one night.

You seem very comfortable being able to talk about all of this, it’s a hard discussion to have in general.

I know a lot of friends and people have struggled or are struggling with substance abuse, and I’ve found that if you just talk about it, people know that you’re someone they can come to talk to. It just opens up room for a real conversation. One of my housemates came up to me and said, “Hey I think I may have a drinking problem” and so obviously then I told him my story and then told him what I did to overcome it. I feel like it’s just such an ugly truth of society. Nobody wants to talk about the real issues because ultimately, everyone has them. People who claim to be “perfect” are usually the ones who have so much more stuff going on and society said don’t talk about it so nothing is ever fixed.

That’s why I like writing and interviewing people for this series, people always have stuff going on whether you realize it or not, issues or hardships big or small, I like being able to be the outlet for people to get their own stories out. And who knows, maybe someone will read it and realize that they themselves can overcome something talked about in the series by another individual.

Even at my darkest times, talking about it has always helped, getting it out there. When my friends are having a hard time, but they won’t open up to me, all I can really say is “Hey, I’m here if you ever want to talk,” that way they know there’s always a safe place in a person to talk.

All in all, what have you learned from this and how has it made you a stronger person?

It definitely made me realize it was not worth it. At the time, I was out of school, didn’t have a job, and didn’t know what I wanted to do… But here I am now, a full time student, working full time too, and I just have so much potential that turning to alcohol was the worst decision I’ve ever made. I have alcoholism that runs in my family, and I concluded that I could be the one to end that. I can be the generation that ends it. I’ve also realized now what I want to do after school which is cool, I want to be a golf course superintendent and work with grass. I’m getting a business degree and I’ll go to turf school where you learn all about what I want to be doing.