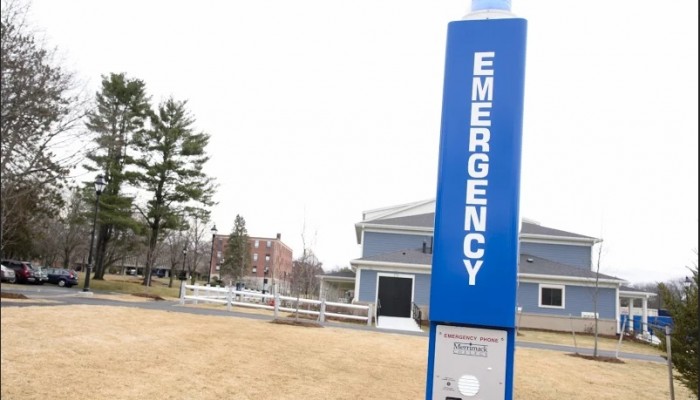 On every college campus there are blue lights located throughout in hopes of helping ensure safety for students. There are eight blue light emergency phones scattered around Merrimack’s campus that students can turn to.. Chief of Police, Michael DelGreco, spoke on why the lights are installed on campus and when students would use them,

“Studies have shown that in times of emergencies people don’t necessarily go right to their cell phones, they look around for assistance, and by seeing these big bright blue phones it’s easier for them to access help more quickly. The blue lights phones is for that,” said DelGreco.

“You don’t necessarily have to talk once that button is clicked, it will pop up to our dispatch which phone is activated, so even if someone may not be able to talk an officer will quickly respond. Wherever there is a camera in that area the dispatcher will focus that camera in that area and see what the issue is until an officer is on that scene” DelGreco explained.

DelGreco explained that the last time the blue light phones were used was last winter during the snowstorm. A student’s car was stuck in the snow, and did not want to leave their car unattended to find help. They called campus police through the blue light emergency phone for assistance. “That speaks to the fact that it’s a fairly safe campus, you always want to have these emergency measures put in place but just for preventative measures… we do this not in response but to be proactive” said DelGreco.

The police department does conduct maintenance inspections on the blue lights to make sure they can still send and receive messages and that it is ready for in case anyone on campus should have to use it.

“We check them every two weeks just to make sure they are functional…what we’re working on now with these latest blue lines is that there’s a speaker attached to them that we can send out a general warning if there’s a specific incident on campus” said DelGreco.