Home > News > SGA: Behind The Scenes With The Voice Of The Students

SGA: Behind The Scenes With The Voice Of The Students 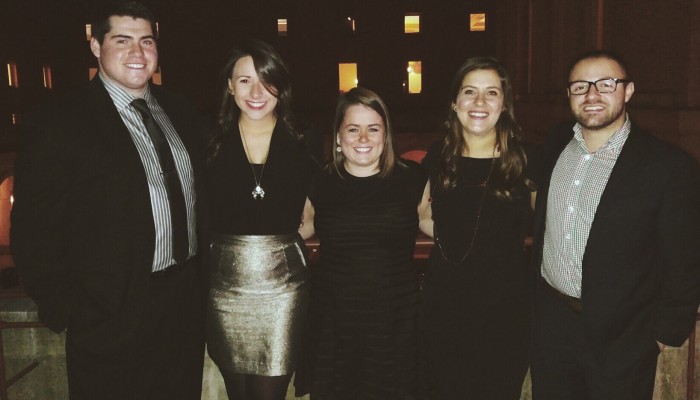 What is the SGA? They are known around campus as the student body voice, but what exactly does that translate to?

For starters, the SGA (Student Government Association) is a collection of 40 student leaders elected as senators to represent every class year. SGA oversees 52 student organizations on campus. They supervise and work with groups ranging from Residence Life, clubs, Sodexo, to even more recently, IT. SGA is dedicated in meeting the needs and wants of the student body through various events and opportunities. The ones who help recognize what the students need and where issues arise? The students themselves.

SGA is advised by one of Merrimack College’s “Most Interesting People,” Allison Pukala, since the fall of 2013. A member of the Merrimack Class of 2006, she is not only SGA’s advisor, but also the Assistant Dean of Students for Student Engagement. Pukala recently began work with Student Engagement this past January. She has also been part of OSI (Office of Student Involvement) for five years.

According to Pukala, the SGA is led by 5 Executive board members and supported by 36 senators representing all class years which includes 4 international student senators, as well as graduate fellow Mari Watson. The association’s executive board head is Club President Anthony Preston, a senior. Preston was very eager to join SGA to help Merrimack become a more enjoyable experience for everyone.

“I joined SGA at the beginning of last year not really knowing what to expect,” Preston said. “I knew it was going to be a new experience, which would give me an opportunity to voice opinions for my fellow classmates about certain issues on campus, whether it was helping keep our community safe to getting more hand sanitizers in the classroom.”

Preston looks back on his experiences with SGA with great fondness.

“I was able to see how an organization with such efficiency can deal with a growing vision for Merrimack while incorporating my fellow students, who bring life to our community, into the mix,” he continued. “Being able to champion an organization such as SGA has only made me gain even more respect for the tireless work that the Executive Board and Senators do to help keep the machine oiled and ready for anything that is thrown at us. To be honest, we are just a bunch of students that enjoy being able to serve a community that has given us so much. ‘Give a little, get a lot’ is what I like to say.”

Pukala talked about how the SGA meets weekly or bi-weekly with other student senators representing the many student committees. The SGA organizes what parties they meet with based on category.  The student organization committee that oversees organizations are supervised by Club Vice-President and senior, Mackenzie Goebel. Member at Large and senior Shane Pacheco oversees all of the committees that meet with offices across campus. During these meetings, the groups discuss current issues and experiences reported by students, such as what the school needs and wants to be changed. In order to further gain a better understanding of this, SGA uses social media, Main Street in the Sak, and face-to-face interaction to hear what’s going on around campus.

“The role of the [SGA and the various committee] senators is to be the voice of their classmates to the officials of the college,” Pukala explained. “SGA has the ability to meet with key leaders on campus and institute change where needed.”

SGA works alongside Student Engagement, the office that helps students start up or join clubs.  Pukala’s job as Assistant Dean of Student Engagement involves supervising Student Involvement, Fitness and Recreation, and Orientation. She warned of how some student clubs and organizations fall apart when SGA and Student Engagement aren’t in the loop.

“Many times organizations dismantle due to lack of leadership or someone graduating and it is important this committee [Student Organization Committee] stays on top of that [with Student Involvement] so that resources are not tied up with an inactive organization,” Pukala noted. “This way they [SGA and Student Engagement] ask for updates and current information frequently. They work closely with Finance to keep them up to speed as well. They also need current executive board members and general board members names so that we can maintain record of this for the college. If SGA doesn’t know someone is involved in an organization — there is not official record with the college, so this is a big deal and why it’s asked for so often.”

SGA is supported by OSI. This office helps out from printing flyers to planning events to managing the funds of SGA and every student club. Pukala mentioned that OSI “makes what students are seeing or experiencing visible and helps to correct as well as supporting the organizations on an official level. The budget needs to be overseen by a college administrator and that is the Director of Student Involvement, Rose Dolan, who has the authority to sign off of expenses on behalf of students. She does this with direct involvement and guidance from the SGA Finance Committee made up of the SGA Treasurer and senators.”

“It is important that students have a voice in how these funds are spent and this is the model most colleges use in order to let students have a say in student organization budgets and spending.  The funds are college funds and so they remain in college accounts that the Director of Student Involvement has access and oversight of.”

Rose Dolan has worked with OSI for a couple years, just becoming Director of the office this past January. She expressed a great amount of enthusiasm for what SGA does, including their Mack Meeting initiative. The meetings are “meant to be a sharing of questions, concerns and excitement” according to Pukala. In other words, Mack Meetings give students a chance to complain about the Wi-Fi and food to President Christopher Hopey.

“SGA’s Mack Meeting initiative has been an opportunity for students to be heard on campus that I think has worked really well in addressing various topics that are important students,” Dolan noted. “SGA has taken student needs and expanded to make sure their needs are met within the capacity of the college.”

SGA is recognized by students all over campus for their contributions, including senior Christian Catricala, Club President of the Merrimack College division of the American Marketing Association.

“I am grateful we have such a hardworking group of students to assist our student organizations in being successful,” Catricala said.

Pukala showed concern, however, that there are still students that don’t know about SGA.

“What I wish would improve is that students realized what an amazing tool and vehicle for change SGA is,” Pukala said. “They want to help students, and they want to report back on good things too and that students can contact them about their needs. SGA is the voice of the student body but they are only as good as the students taking advantage of engaging with them. That is why SGA elections are crucial! The SGA President will represent the student body each year, it’s not a joke of an election, it’s vital. Keep an eye out for elections in April!”

“They [SGA] are always growing, always improving, and always trying to make things the best they can for all students not one or two groups.”
Representing all undergraduate students can sound like an intimidating task, but Preston continues to be passionate for what he does as President. He and Pukala agree that how SGA continues to evolve helps Merrimack College change for the better.

“I have seen this organization systematically change over this short year in a positive way,” Preston acknowledged. “We have grown in size, approved new student orgs, and managed to find ways to better represent our student body as a whole. Things change daily in SGA in regards to our agenda. History shows that the things we are working on now can change within the hour. It’s hard to tell what our plan is long term other than always serving at the pleasure of the student body to help solve issues on campus and redefine our student experiences here at Merrimack. We always look forward and hope that students stay in communication with us to have their concerns heard so we can work to get them solved as quickly as possible.”