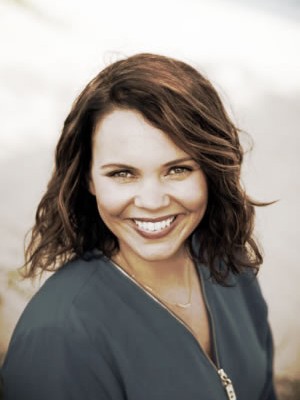 Did you know that “Plus Sized” in the industry is actually a size 6?! Where did the stereotype of as a size 0 as the ideal body size? Every year Merrimack hosts a Women’s Leadership Seminar with different kinds of keynote speakers and themes. This years was different than the past, on Wednesday February 17th, 2016 Stacy Nadeau was our special keynote speaker. You may be thinking who is Stacy Nadeau, doesn’t sound familiar, think again. Rose Dolan, Director of Office of Student Involvement, brought Stacy to Merrimack because her office was very excited about Love Your Body Week and saw she was available during Body Awareness Month. Stacy was one of six of the Dove Campaign for Real Beauty women and has been seen on Ellen, Oprah, The Today Show, and many known networks. Stacy Nadeau, a college student at the time at DePaul University in Chicago, Illinois, was approached at her secretary job and asked if she would be interested in modeling. She laughed asked her if she was kidding because Stacy considered herself ‘curvy’ as we like to call it and not a model at all. Stacy had no idea that she would be at a life changing audition in less than one week in New York City.

The audition consisted of photos taken (front, left, right, back) of Stacy in double-layered underwear and a bra. After about 6 months of waiting and 7 callbacks later, Stacy received ‘the call’ – she was one of the six chosen Dove Girls. The six girls chosen were of all different body types and ethnicities, not one had ever modeled before. This was the point, to have real women of natural beauty making a statement. In the Summer of 2005 the Real Beauty campaign was launched; billboards, buses, bus stops would be plastered with five other women and herself posing in their underwear. This campaign was about real women, with real curves and would be one of the first untouched photo campaigns in history. Later to be followed 10 years later by Aerie, Lane Bryant, and many more.

Before the launch of the campaign, Dove conducted a global survey asking them three simple questions, one of the most popular, “Do you feel comfortable calling yourself beautiful?” Only 2% had responded yes. 10 years later, the same survey was conducted, 4% responded yes. That means that 96% of women wake up and say to themselves no I don’t wake up and feel beautiful, in fact there is something they want to change about their body. According to Abby Adams, “One thing I could say that I took away from the speech was how long it has taken for another campaign similar to the Dove one to come out. Stacy has been working her very hardest to get her word out for positive body image and trying to help young women to see beauty when they look in the mirror.” Until 10 years later, regardless of the feedback from Dove’s Real Beauty Campaign had any companies attempted to carry out a similar message.

According to Dove the mission of this campaign was  “to make more women feel beautiful every day by widening the stereotypical theme of beauty and by inspiring women to take great care of themselves.” The six women that then became the Dove Women made a pact that after doing this campaign if they made a difference to make just one women feel better or maybe challenge men to think differently about what beauty is, this campaign did its job.

Since the launch of the campaign Stacy sets out to have women embrace their real beauty by being a speaker who expresses her expertise about body image, self-esteem, and women’s empowerment. She wants everyone to start the conversion of what is the definition of beauty. We’ve all seen the media, when asking the audience, “What is the stereotype for a woman in the media?” asked Stacy. The responses came within seconds, size zero, tall, and blonde.  “What is the stereotype for the men?” asked Stacy. The audience sitting right in Cascia Hall did not even blink, muscles, a 6-pack, and the V. We don’t even know where this definition came from in the first place; it is just constantly reinforced through the media constantly.

According to Stacy Nadeau, “Your own best healthy self is just that, it’s yours, its different from everyone in this room, your family, everyone at this college, everyone.” She wants women and men to think, what is my healthy self like? Every single person has a different body type. We have a different genetic background as well as a different lifestyle our bodies are all unique. Let’s change the conversation; we need to shift away from what Stacy calls, “Girlfriend Poker.” When women gather around each other begin bashing their bodies, this is girlfriend poker. “Oh my god I am so fat” “Ugh, do you see my thighs?” “Why can’t I be like her? (Action: Points at a model on the cover of Cosmo magazine who is actually airbrushed and made up of 4 different people.) Stacy mentioned this game where we pick on our own bodies and how it is not good for us. According to Abby Hancock, a senior took away this message from her speech, “We are all beautiful and I wish more women today would see that.”

We as women can make a difference, if we join together, we can change the conversation for ourselves and the way men talk about women. Media responds to what people want, we need to stop being ok with the definition of beauty being something unattainable. “Stop comparing yourself to the people you see, you cannot walk around campus airbrushed, its not possible,” stated Nadeau. Be happy in your own skin and instead of saying the things you hate about yourself think about the things you love. According to Abby Adams, a junior, more women will start to be more realistic with the help of campaigns like Sports Illustrated swimsuit cover and the Aerie campaign coming out. There is a very hopeful future out there by changing the ways in which we talk about our bodies and others. “Body image and self esteem are issues that college students are facing nationwide; Stacy was able to highlight the importance of utilizing the resources that are available on campus and most importantly advocating for our friends and peers,” said Rose Dolan. Stacy Nadeau was a very inspirational speaker who shed a lot of light on a topic that is not brought up enough not only on college campuses but also in the media. Lets make this change on Merrimack’s campus too!