Liverpool Walkout and the Red Sox 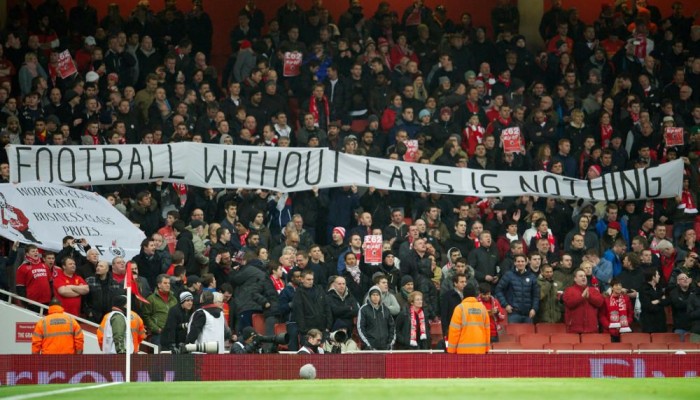 This past Saturday, thousands of Liverpool fans attended their teams Premier League matchup and walked out in the 77th minute of the match. Why? The fans were protesting the ownership’s greed and plans to increase ticket prices. The Fenway Sports Group announced before the match that ticket prices at Anfield would increase again. A £77 match ticket (about $112), up from £59 ($86) and a £1,000 season ticket were announced the week prior.

Why does this matter to Boston fans?

Fenway Sports Group owns both the Sox and Liverpool. Both teams have seen the price of going to their club’s games increase dramatically over the years. After their second straight losing season, the Red Sox awarded their fans by increasing ticket prices by an average of 1.4% for the 2016 campaign. Fenway Park was already the most expensive ticket in baseball in 2015 with an average ticket price of $52.34. The Fan Cost Index or FCI of attending a game at Fenway is also highest in the MLB at $350.86. FCI is an estimate of the cost to attend a game for four people, including tickets, food, parking and other purchases. In comparison to the Red Sox prices in 2015, The Padres have the lowest average ticket price of $16.37.

The walkout at Anfield (Liverpool’s home pitch) was executed this past Saturday and thousands left the match in the 77th minute. The actions of Liverpool fans had reverberations across Europe. In Germany, Borussia Dortmund fans protested the raising of their own ticket prices in a unique way. Hundreds of tennis balls were hurled onto the pitch and the match had to be suspended so players and staff could remove them. Borussia Dortmund’s supports unfurled a banner that read “Fussball muss bezahlbar sein”- which translates to “Football must be affordable”.

The walkout ended up being extremely effective. Fenway Sports Group was forced to release a statement that read, “It has been a tumultuous week. On behalf of everyone at Fenway Sports Group and Liverpool Football Club we would like to apologize for the distress caused by our ticket pricing plan for the 2016-17 season”. The FSG admitted “they got it wrong” and froze the idea of raising ticket prices for next season.

At what point will the cost of attending a game at Fenway stop rising? Despite the past two losing seasons, Fenway Sports Group has seen their revenue rise from $357 to $370 Million. Ticket prices continue to rise. The average fans and families that have followed the team for generations are charged arm and leg for entry into the stadium. Many cannot even afford the cost to attend a game.

Could a walkout at Fenway ever occur like it did at Anfield? John Henry and Tom Werner certainly don’t seem to think so. Last year, Major League Baseball brought in a record $9 billion in revenue. At some point, hopefully Fenway Sports Group decides enough is enough.

The Sox have one of the most loyal and diehard fanbases in any sport around the world. Reward them by making attending the games affordable and fan friendly. Baseball is nothing without its fans.  Hopefully Sox fans will find inspiration from Liverpool’s fanbase and stand up to John Henry and Tom Werner instead of accepting their absurd attendance costs.