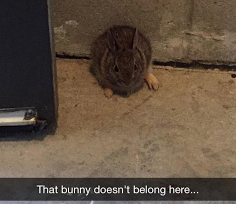 As students returned from winter break, many were greeted by animals lurking around the campus. There have been accounts of these animals entering the residence halls due to doors being propped open.

There have been mice and rabbits reported in residence halls and raccoons and coyotes seen on campus. A mouse had been reported to have been cycling in and out of the laundry room located in apartment L for about two weeks, according to senior Kathleen Mooney. A rabbit was reported in another resident hall.

“The first time I saw the mouse I was extremely alarmed. I was not sure how it got in there, but I was pretty grossed out that a mouse had the potential to be in my room as I live on the first floor. It made doing laundry a hassle as well; I was afraid of running into it,” Mooney said.

Along with the mouse incident, students have reported hearing coyotes in the woods behind campus.

“I’ve heard the coyotes a lot recently it’s kind of crazy. My roommates and I wonder why all of the sudden the coyotes are surrounding the backwoods of the apartments. It’s actually really crazy how loud they get, it sounds like there is a large group of at least 20. They are so loud they keep us up at night sometimes,” said senior Bryan Caceido.

The Merrimack College police also reported an incident on January 28, 2016 called in by a student about a raccoon. This incident occurred outside of South Residential Village.

“Facilities trapped the raccoon and will release it away from campus,” states the police log.

“Residence Life has been working closely with Facilities and the Merrimack College Police Department to ensure that all exterior doors are closed and latched,” said Cameron Smith, Director of Residence Life.

According to Smith, students have also been encouraged not to prop doors open through floor meetings, targeted and building wide e-mails, as well as signage throughout residence halls.

“Please do not prop exterior doors! As the weather brings more snow and cold, leaving the doors propped open could cause the pipes in our buildings to burst. Additionally, propping the doors is a safety concern as this leaves the buildings open to intruders (including animals) and we do not want any unwanted visitors (or critters) in our halls,” was stated in e-mails to students from various resident directors and assistants.

Propping doors does not only bring concern to animals entering into the residence halls, it is also an opportunity for other unwelcomed guests to enter the buildings.

“It’s inappropriate to be propping doors open because it is a student safety issue,” said James Chiavelli, associate vice president for communications.