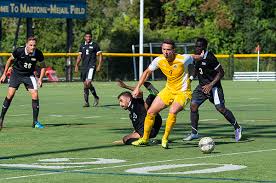 Silva, a forward/midfielder is from Hudson, Massachusetts. He made 18 starts during the 2015 season, and in those games he set career highs both in goals and points. Silva scored 12 goals and totaled 28 points. Silva also led the team with 50 shots, 27 of which were on goal.

While reflecting back at his collegiate career, Silva said, “It is a great honor to be named an All-American and it is certainly something every athlete strives for. I could not have done it without my teammates and our success on the field, and it is nice to go out with this honor.” 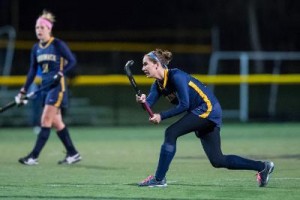 Silva’s fellow teammate Joseph Briers also received the honor of being named an All-American. Briers, a junior from Nottingham, England, set some career highs during the season. Briers scored six goals, had four assists, and had a total of 16 points during the year. Of the six goals he scored during the season, five of them were scored on penalty kicks. These numbers allowed the junior captain to finish third on the team in goals, points, and assists.

Being named an All-American is something Briers has always wanted to achieve since coming to Merrimack College. However, he stated, “going through the year it didn’t really cross my mind to be honest; I was just more focused on the team doing well in both the conference and NCAAs.” Briers also added that he couldn’t have been happier receiving this award, especially alongside his teammate, Silva.

With one season left for Briers, his expectations for the next season are high.

“The goals for next season are to finally win either the regular season or conference championship and to also make it further in the NCAAs than we have the past two years,” Briers said.

Zubkus, a senior midfielder from Dover, New Hampshire is now the second member of her family who has been named an All-American. In 2011, her sister Katie Zubkus was a second team selection for Merrimack College.

Zubkus had three goals and three assists in her senior season, helping the Warriors finish within the Top 10 offense and defense in the nation. She finished her career with eight game-winning goals, and a total of 22 assists with 50 points.

Following in the footsteps of her older sister, Christine Zubkus said, “being named an All-American has been a personal goal of mine since my sister was named All-American her junior year.”

Among being honored to have ended her career as a National Champion Runner-Up as well as an All-American, Zubkus also mentioned that playing field hockey at the collegiate level has shaped her as an individual that she is today. Zubkus also stated that she could not have done it without the support of her teammates and coaches.

Zubkus teammate and freshman midfielder McNeil, a Canton, Massachusetts’s native was the leading goal scorer in the nation among freshmen. McNeil ended her first collegiate season with 14 goals, 11 assists and 39 points.

Receiving this award as a freshman came as a surprise to McNeil, but she admitted she was “truly honored and grateful.” The promising young midfielder was also thankful for her coaches and teammates this season for pushing her to become a better player and teammate. McNeil also has high expectations for the team heading into next season.

“If we continue to work hard this offseason and stay on the same page, then we definitely have the potential to make it all the way back to the NCAA tournament and hopefully win a national championship,” McNeil concluded.