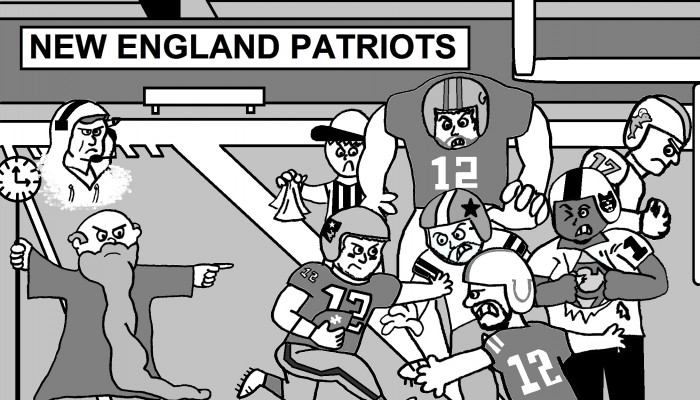 Today we live in a society where we often become prisoners of the moment. Where the hottest new songs, dance moves, and fashion trends become headlines and trending worldwide topics. We are always looking for what’s next, for that instant gratification. This is no different in the world of sports, where the young, flashy prospect often comes and steals the spotlight from the aging star. It’s like the athletic circle of life, you get that one opportunity to show what you have, jump on to the scene, and replace the older legends on the brink of retirement. In the sport of football, this may be most prevalent. However, somehow one quarterback in the NFL has defied this pattern, at least for the time being. His name: Tom Brady.

We can all keep holding our breath waiting for the next young quarterback to show themselves. The 199th overall pick from the 1999 NFL Draft continues to battle father time and at age 38, Brady is the current front-runner for yet another MVP award. So when is Johnny “Football” Manziel, or the now benched Colin Kaepernick going to eclipse the old man as top dog? The now seemingly non-existent Robert Griffin III, or RGIII, doesn’t look like he is going to become what he was supposed to. Who can forget the 1st overall pick from a few years ago, the great Andrew Luck. The fact is, we can keep trying to find a Brady replacement, but no one has been able to keep pace. Entering the season, Brady was a part of the top few elite play callers in the league.

If you asked any NFL fan at the beginning of the season who the best QB’s in the league were, most unbiased ones would say some sort of combination of Peyton Manning, Aaron Rodgers, and Tom Brady, with varying orders. So let’s do a “where are they now” scenario with these all-time elite players. We can start our journey in the Mile-High City, Denver, Colorado.

Peyton Manning, often regarded as the best regular season quarterback of all time, has always had trouble in the big games. However this regular season has been nothing but awful for Peyton. At age 39, he has looked more like 49, losing almost all velocity and accuracy on his throws. Somehow, due to their elite defense, the Broncos raced out of the gates with a 7-0 start. Manning has thrown 9 touchdowns and 17 interceptions in the time he played this year. Now Peyton has been benched with a combination of injury, and inefficiency. I guess we have to assume Brock Osweiler is the next quarterback to be crowned heir to the thrown prematurely.

In Green Bay, Wisconsin, the “bad man” that is Aaron Rodgers has been that for consecutive games, which is pretty bad for his standards. Once he only managed to throw for a mere 77 yards in a full game. He has also surrendered games to the hapless Detroit Lions, and even the struggling Chicago Bears. He has come back a bit over the last couple of games, but the year overall has been a down one for Rodgers.

The Denver Broncos and the Green Bay Packers still find themselves in the playoff picture, and are even still among the favorites to win it all this year. This however, has little to do with their “legendary” quarterbacks. Tom Brady has risen from the pack as he continues to do less with more. Injuries have plagued the Patriots lately, with Gronkowski, Edelman, and Amendola all missing time. While the team has struggled in its latest games, it hasn’t been because of poor play on Tom Brady’s part as he finds himself throwing to guys off the street. He looks more mobile than he ever has, and still has a chip on his shoulder four super bowl rings later. We will have to let the regular season play out, hoping that some of these receivers get healthy. We can rest assured that the dynasty that is the New England Patriots will find themselves in the playoff mix, and the greatest quarterback of all time will be a big reason why. Let’s watch as he continues to take on the entire NFL, the commissioner, jealous fans, and opponents alike, as he keeps winning. On and off the field, Brady has proven to be a true champion.