Home > News > Being Muslim In America

Being Muslim In America 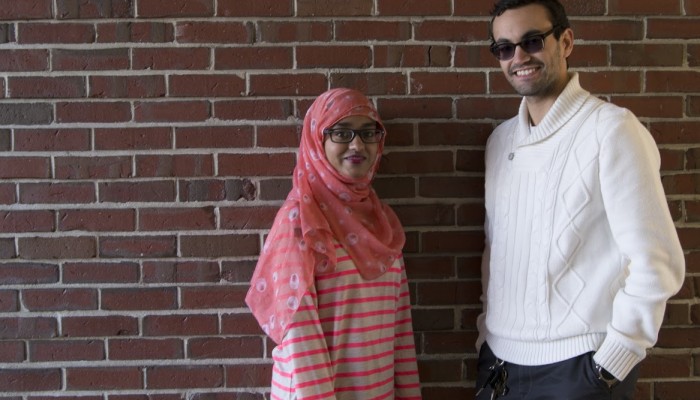 Merrimack senior Maria Haseeb wears a traditional Muslim veil as a testament to her religion. To her, it means modesty and is an expression of her spirituality.

But Haseeb knows first-hand what her hijab symbolizes to some. At her off-campus job, some customers make snide comments they think she can’t hear. She sees the harsh looks.

Haseeb and other Muslim students talked openly about the backlash they receive when terrorist groups like ISIS hit in the name of their prophet Muhammad. They said people are accepting here at Merrimack College, but outside campus, it’s different. They said some people are judgmental because they don’t understand Islam. They don’t understand what the terrorists of ISIS have done is not what the Muslim religion is all about.

“Most people don’t understand what Islam is and what Muslims believe. Everybody should ask more questions about different religions to clarify misconceptions,” Haseeb stated.

Shareef Kotb, another senior student of Muslim faith, agreed. He said the Muslim religion is misunderstood, especially when it comes to terror groups like ISIS.

“It is really a peaceful religion,” Kotb said.

It was last Friday night in Paris when at least 10 terrorists hit six places where people gathered almost simultaneously. Authorities believe these terrorists unloaded heavy gunfire into restaurants and a concert hall while suicide bombers detonated their explosives outside a soccer game between France and Germany.

Within a few hours, 129 people were dead, another 352 injured, many critically. The terrorist group ISIS claimed responsibility.

ISIS is an extremist group, made up of followers not afraid to die for what they believe in and not afraid to kill for their cause. They are based in Syria, but their reach extends beyond the Middle East.

Both Kotb and Haseeb said the actions of ISIS do not represent the true spirit of Islam. They denounced the group’s actions. Haseeb said “Muslims are not supposed to act that way.”

“There are fanatics everywhere — every religion, every culture. It’s definitely a personal thing, not a religious thing,” Kotb stated.

ISIS is just a small fraction of Islam, the second most practiced religion in the world. But Kotb and Haseeb said people stereotype Muslims and ISIS as one group, leading in backlash against the Muslim community.

Kotb said it is similar to the backlash after the Sept. 11, 2001 terrorist attacks in America. During that time, his sister also chose to wear a hijab. He said she would receive dirty looks from people around her. Kotb said that these dirty looks began to die down as time passed, but this period was short-lived as the ISIS threats and terrorist actions increased.

“You can’t blame a whole community or a whole population on account of one person’s act,” Haseeb said.

Neither Haseeb nor Kotb has felt negative backlash toward their faith at Merrimack College. Kotb said more of what he gets from fellow students is curiosity. He has read the Qur’an in Arabic five times and participates in religious fasting, which, he says, many people find interesting about the Muslim faith.

Kotb, however, does not go out of his way to tell people he is Muslim.

“Not that you feel ashamed of your religion, you feel like you can’t come out and say you’re Muslim,” Kotb said.