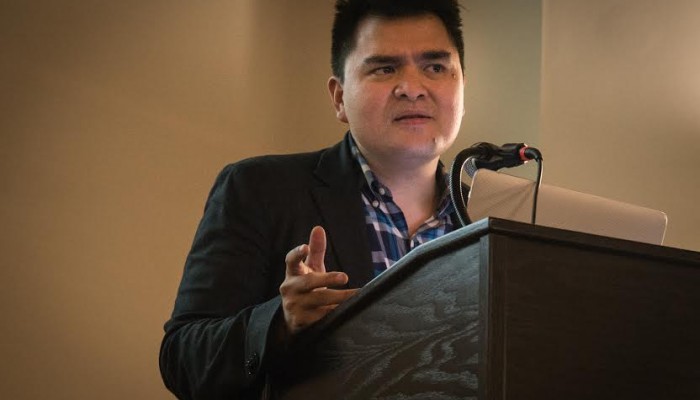 On November 9, a swarm of people gathered together in Cascia Hall to hear Jose Vargas, an undocumented immigrant and immigration reform activist, give his speech titled “Define American.”

Vargas was surprised when he walked on stage by saying, “What’s going on? I didn’t expect there would be a crowd.”

He covered a lot of ground in his hour speech, covering stories from his own life and how others act around him knowing that he is in the United States illegally.

Dr. Raechel Tiffe, who is a professor at Merrimack, stated, “I was really excited to hear that Jose Vargas would be speaking at Merrimack. I knew based on Vargas’ work on immigration, race, privilege, and oppression that his talk would tie into the classes I teach.” Tiffe encouraged her students to attend his talk that night.

When Vargas was thirteen years old, his mother put him on a plane from the Philippines headed to California to give her son a better life. His grandparents came to America legally and helped smuggle their grandson into the United States. Vargas never knew until he was sixteen that his green card was a fake until the lady at the DMV told him so.

Vargas was very comical while presenting the audience with a heavy political debate that has been an ongoing topic for quite some time in the U.S.

He mentioned, “No one talks about undocumented white people, it’s all about Mexico.”

Vargas gave the audience a fact stating that since 9/11 occurred, the U.S. government has spent around $100 billion dollars on border and immigration control at the Mexican border. He believes that money should go to college students who are studying to get a degree.

Dr. Melissa Zimdars, who is also professor on campus, expressed, “I think his message about immigration is an important one given the hateful political climate.”

Vargas also touched on intersectionality and he stated, “Most white Americans live in a bubble.”

Vargas expressed that most white people living in the country never face what he faces every day. He cannot leave the country because he does not have the right papers.

He is thirty-four years old and has not seen his mother in twenty-two years. Vargas’ mother also cannot come to the United States legally because she has been denied a travel visa several times, as she is from a third world country.

As Vargas ended his speech, he said that immigration “…is a marriage between you and I and we have to figure it out.”