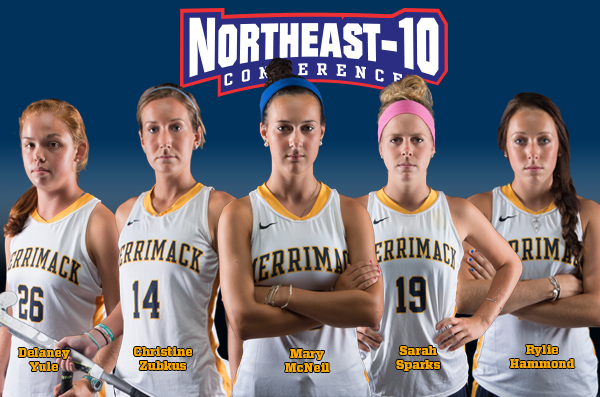 Merrimack College’s field hockey, women’s soccer, and men’s soccer teams are all still in contention for an NE-10 Championship after quarterfinal wins this past Tuesday.

The Merrimack Warriors’ field hockey team came out firing against sixth seeded Bentley Tuesday following a tough 2-1 loss in their last regular season game against Saint Anselm on Saturday. Junior Hannah Magerman would start the Warriors offense early with the first tally of the day when she followed her shot and was able to bury her rebound around the goalie in a valiant effort. Freshman Mary McNeil carried the Warrior offense in the game and would tally two goals in the match, which brings her team-leading scoring total to 14 goals. This was her third multi-goal game of her freshman campaign. Senior Lindsey Dobecki put one on the board with 5 minutes left in the game to seal the victory and bring her scoring total on the season up to 7.  In net for the Warriors was Senior Madison Davis who notched 2 saves for her fifth shutout of the season. The NE-10 semi-final game will be played Friday night at second seeded Assumption.

The only road victory of the huge NE-10 day for the Warriors came up in Manchester, New Hampshire as the fifth seeded Women’s Soccer Team battled the four-seeded Southern New Hampshire Penman. The Warriors knew going into the game it was going to come down to the wire, as earlier this year the Warriors had some late game heroics with an 89th minute tally by sophomore Andrea Rego.

The game started with the Penman scoring first, and putting the pressure on the Warriors. The Warriors would respond only 19 seconds later with a score by sophomore Cori Gillen, assisted by freshman McKenna Moore. The game remained tied for the remainder of regulation. Early into overtime, the Warriors were on the attack and sophomore Sarah Boucher was taken down in the box. This allowed for senior forward Jenna Savi to bury the game winner on a penalty kick and help the Warriors advance to the NE-10 semifinal. The squad will travel down to Long Island to face off against the Panthers from Adelphi University.

To round off the eventful night the Merrimack College Men’s soccer team took on the seventh seeded Saint Rose Golden Knights in the NE-10 Quarterfinals Tuesday at Martone-Mejail. The Warriors are no strangers to postseason play as they have appeared in the Conference tournament the past five years. The Warriors showed they know how to keep their composure behind the leadership of Augusto Silva and Joseph Briers. 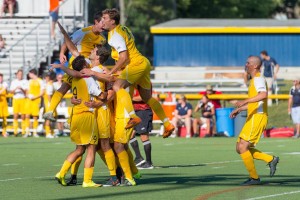 The first half was fairly uneventful and was left scoreless, this left plenty of excitement to take place in the second. The Warriors came out pressing on offense and had two good shots in the first 20 minutes that were stopped by the Saint Rose keeper. In the 67th minute junior Connor O’Brien drew a foul right outside the box, which left Joseph Briers with a free kick that the Penman goalie had no shot at saving. Just minutes later Briers crossed the ball to the center of the box finding Silva who was left wide open and scored his 12th goal of the season on a one timer. Sophomore goalkeeper returned the lineup doing a great job controlling the defense as he recorded one save. The Warriors play in the NE-10 quarterfinals for the fourth year in a row and will host 3rd seeded Adelphi Friday night.