Frat Lives In Tent To Raise Money For A Good Cause 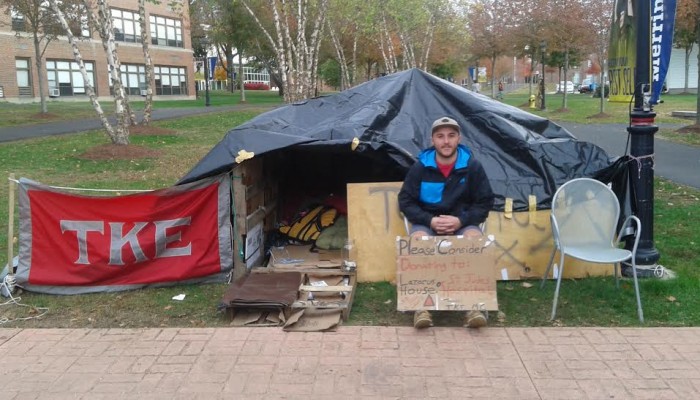 You may have seen a tent set up outside of the Sackowich Campus Center this week with members from the TKE fraternity making collections. The collections are all made for the St. Jude Children’s hospital and also for Lazarus House, a homeless shelter in Lawrence.

“As a fraternity we have our philanthropic work that we do. Our national philanthropy is with St. Jude Children’s Research Hospital for cancer, but our local one is with the Lazarus House in Lawrence,” explained Thomas Drover, who is a member of TKE.

The fraternity has been out the past week in a tent that was built by them with different members sleeping inside the tent each night to experience just what it’s like to live homeless.

“We are camping, acting as the homeless do, to raise awareness and donate money to St. Jude and the Lazarus House,” said Drover. “So every night, three brothers will be sleeping in the tent battling these cold nights and during the day there will be at least one guy raising money.”

The support has been overwhelming on campus this year as the fraternity is on pace to beat the donation mark of $700 that was set just a year ago.

“Last year I think they made $600 to $700 and the first day this year I think we made close to $400. So we are already on pace to beat last year’s mark,” said Drover. “It’s been cool and humbling. It’s been cool because students are asking us about it, and it’s humbling because we’ve been out here and it’s not been fun, but you get a glimpse of the life of a homeless person.”

Because of the set-up outside of the campus center and that they are staying in a tent, most students are curious about what exactly they are doing.

“Most people give us a weird look, but they have been really inspired by it. If they have a couple dollars with them or change they always tend to give it to us which is really nice,” explained Drover. “It’s nice to get the word out here on Merrimack’s campus.”

Drover explains how it feels to be put into the shoes of the homeless for the week and how he has a new perspective on homelessness in general.

“I’m relatively new to the fraternity, so this is my first time doing this and it is eye-opening,” said Drover. “Even just standing out here and watching people walk by and give you kind of a weird look, but even that is raising awareness about homelessness.”

TKE would like students on campus to know about their philanthropic work and how they are able to help the community with events such as the one that took place this past week.

“I would like them to recognize that there is a fraternity on campus that has good philanthropy,” said Drover. “I also want them to understand that our philanthropy is raising awareness for homelessness and the St. Jude foundation which is just great.”