Home > Sports > Merrimack Athletics > Amidst All The Chaos, Merrimack Football Still In The NE-10 Title Hunt

Amidst All The Chaos, Merrimack Football Still In The NE-10 Title Hunt 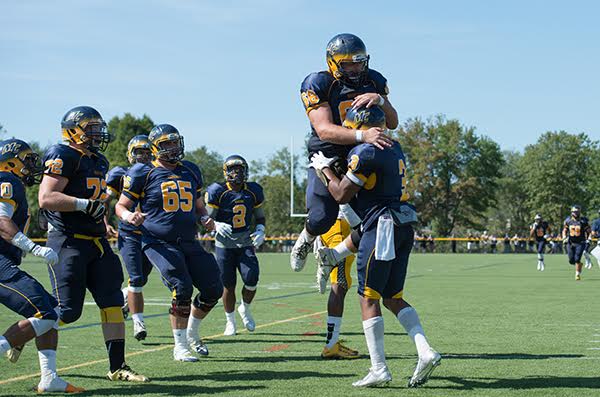 In week one, the Bowie State Bulldogs led the Merrimack Warriors by 11 points in the fourth quarter. Merrimack would ultimately battle back but fall just short to Bowie in a surprise 35-32 loss to start the season- largely due to the efforts of Bowie QB Matthew Goggins who racked up 313 yards and 3 touchdowns. Skipping ahead to week 5, news broke that Goggins was ineligible; all of Bowie’s four wins (including the Merrimack win) would be vacated under NCAA rules. He had attempted to play a sixth season of football that was not granted by the NCAA. Unfortunately the loss still counts for Merrimack. Luckily it was an out of conference game.

In week two one of the stronger teams in the NE-10 rolled into town; The Stonehill Skyhawks. A punt block by Nick Gallo early in the fourth quarter for the Warriors would result in a touchdown and Merrimack found themselves ahead 20-10 with just minutes to play. Stonehill would rally back with a 7 play, 59-yard drive resulting in a touchdown. The Warriors would lead 20-17 until Stonehill forced a Warriors punt. On a crucial 3rd down on Stonehill’s final drive, Merrimack would force an incompletion resulting in a Stonehill 4th down. However a shocking sideline interference call was called against Merrimack; Stonehill was gifted a 1st down by the referees. This time Stonehill would not pass up opportunity- The Skyhawks took the lead late in the 4th and never gave it back. Stonehill rolled out of North Andover with a 24-20 victory.

Week 3 came quick and the Warriors would look to bounce back against the current conference leader Assumption Greyhounds. Once again Merrimack would find themselves leading late in the fourth 29-23. Another heartbreaking loss developed in Worcester as Assumption scored two late touchdowns to beat the Warriors 36-29. An impressive final as the Greyhounds lead the NE-10 through week 7.

Week 1: Merrimack loses to a Bowie State team controlled by an ineligible player. Week 2: Merrimack loses due to a phantom personal foul call. Week 3. Merrimack barely loses to one of the best teams in the conference. Entering week 4 with no wins was nothing close to what the Warriors had desired.

An official complaint was filed by the Merrimack Athletic Department against the referees of the Week 2 Stonehill game. Merrimack’s game tape revealed there was clearly no sideline interference. After an investigation by the NE-10, an official apology was given to the Merrimack coaches for the incident. Unfortunately it proved hardly enough to heal the wound from the loss and does nothing to change the outcome.

So what did the Merrimack Warriors do after losing 3 tough games to start the year? Some teams would panic, others would pack it in, some would even question; but all the Merrimack Warriors did was hit the field and practice even harder to finish the season as strongly as they could. All of the tough calls, all of the bad bounces, as Coach Curran would say, “It…Just…Doesn’t…Matter.”

Week 4 featured one of Merrimack’s top rival teams in the Bentley Falcons on the Warriors home turf. It was time to make a statement to the rest of the league and take control of the season. The Warriors came out firing on all cylinders to defeat Bentley 41-10 and capture the first win of 2015.

The following week presented a great challenge that no one in the Merrimack locker room shied away from; an away game at New Haven- at a stadium that the Warriors had never captured victory within. New Haven had won their last three in a row prior to meeting Merrimack. With 1:44 left in the 4th quarter, Nick Davis completed a flawless drive with a 17yd TD completion to Jere Brown and the Warriors took a shocking 14-10 lead over the highly favored Chargers. The Merrimack defense would come up big and forced New Haven to lose the game on their own blue (and very ugly) turf.

All of a sudden Merrimack was on the radar and the week 6 matchup on Long Island at Post would prove to have huge NE-10 implications. Another close battle ensued between two heavyweights, trading punches and touchdowns throughout the game. After taking a 3-0 lead into the locker room, the Warriors would find themselves down 20-3 in the 3rd quarter. No one on the Merrimack sidelines hung their heads for a second. While encountering some unbelievable calls by the zebras, the team battled through adversity to give themselves a chance at a final drive to tie late. The Warriors drove into Pioneers territory down by 3 but the game tying field goal would just miss with time expiring in the 4th quarter.

The Warriors would find themselves 2-3 in conference, harboring a lot of frustration after 5 conference games. Luckily it was homecoming weekend and the Warriors would have the opportunity to take out that frustration on St. Anselm in front of a huge home crowd. St. A’s never stood a chance and Merrimack rolled over the Hawks 41-16.

NE-10 D2 Football Blogger Paul Falewicz summed up the state of Merrimack’s season prior to the St A’s victory well: “The team with the strongest strength of schedule through six weeks is Merrimack. The Warriors have played six teams with a combined winning percentage of 66.67%. Despite an overall record of 2-4, the four losses for Merrimack were by a total of 17 points. A different bounce or call here or there in those four losses and the Warriors might have an overall winning record.”

Analyzing the back end of the year, Merrimack has the easiest strength of schedule remaining out of all teams in the NE-10. The combined record of the Warriors remaining opponents is 5 wins 13 losses. With the way the conference playoffs are organized, the NE-10 champion is crowned within a title game between the number 1 and number 2 seeds in the conference. If there is a tie in record at the end of the year, conference standings are determined by head to head records.

Despite the tough start of the 2015 football season, Merrimack is tied for 3rd in the conference with 3 other teams at 3-3 as of 10/12/15 (Stonehill, AIC, Merrimack). There are three teams tied for 2nd at 4-2 over Merrimack (New Haven, Bentley, Post). Assumption is alone at the top at 4-1. If Merrimack can stay focused, win out, and take advantage of some of their divisional opponents losses they may find themselves with a huge opportunity:  a chance at the NE-10 title on November 14th. Three games remaining and so much left to play for. The Warriors wouldn’t have it any other way.