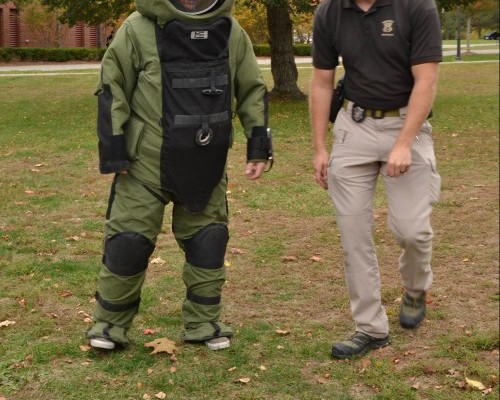 On October 14th, technician Dan Jones and Lt. Paul Zipper of the Massachusetts State Police came to Merrimack to inform students about what kinds of things bomb squads do and what the job is really like.

The event was hosted by the Criminology Club and Dr. Karen Hayden. It took place both inside and outside O’Brien Hall.

The Massachusetts State Police Bomb Squad consists of 12 members,  supports the SWAT team, and responds to all threats across the state. Jones is new to the team, having previously been a firefighter. Zipper is in charge of the bomb squad.

Students were shown demonstrations of the squad’s technology, including robots, and met the squad’s bomb-sniffing dog, Dash. The presenters said that last year showed a record number of bomb threats, especially in schools.

Student Lauren Buttiglieri was in attendance and said,  “I really liked it [the presentation]. It was super informative.”