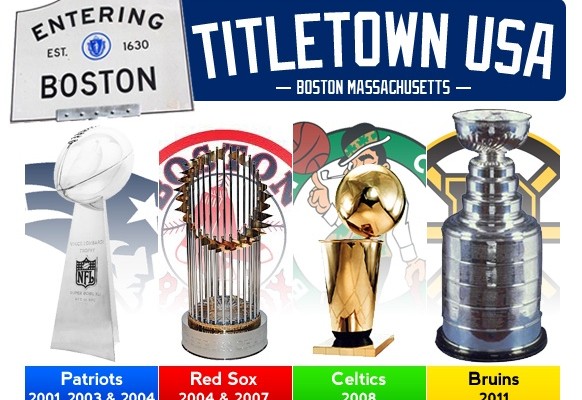 The city of champions; a title we New Englanders bestow upon our beloved city of Boston. After a long history of mere mediocrity, our local sports teams turned it all around at the turn of the century. This great series of success has my fellow 90’s kids feeling like we arrived at the right time to be a Boston sports fan. Whether it’s a broken curse, or a resilient dynasty, it seems we have witnessed some sort of magic here over the past decade and a half; a sort of buzz that our elder relatives are sharing with us. I think it’s safe to say we are reaping the benefits of a life long struggle for Bostonians that precede us for generations.

In 2004, the Boston Red Sox ended a devastating championship drought of 86 years, known as the “Curse of the Bambino.” Only feeling about eight of those years, I will never know the pain of those people that endured such a streak. This band of idiots cowboyed up and did what no one ever did before. Being down 3-0 in the ALCS the Sox came all the way back and neutralized the New York Yankees and their “Bronx Bombers” attack. After another 2007 David versus Goliath story, the Sox were champs yet again. Of course most recently, the team proved to be “Boston Strong” as they motivated and inspired a city with their third crown in nine years. From Manny being Manny, to the bloody sock, or Big Papi’s clutch antics, we have seen it all in the last decade on the diamond.

There also exists a team that never won a Super Bowl until February 3rd, 2002. That same team happens to be one of the closest things to a sure thing that pro sports has seen in the last decade. The New England Patriots are success personified in the modern era. With Robert Kraft at owner, Bill Belichick at head coach, Tom Brady at quarterback, Rob Gronkowski at tight end, and Stephen Gostkowski at kicker, a case could be made that they are all top dog at their various positions today. Amidst controversies, heavy doubt, and impossible odds, this team has not gone away. Winning a couple more rings, and many division titles, they strolled into the 2014 season with a rocky start. After a rough loss to the Kansas City Chiefs, former NFL quarterback and analyst Trent Dilfer proclaimed on the air, “let’s face it, the New England Patriots, they’re just not good anymore.” Months later, Brady earned trophy number four with the help of the Butler. From intense Vinatieri clinchers to deflated footballs, Brady now looks to fill out the fist this NFL season.

On the hardwood, the Boston Celtics have had their success as well. In 2008, a “big three” united in beantown to win the NBA championship. Ray Allen and Kevin Garnett migrated to the east coast to join long time Celtic Paul Pierce. As Garnett declared, this green team has taught us, “Anything is possible!” An unusual example of a Boston team whose past success outweighs its more recent, The C’s continue their pursuit of banner number 18, and to restore their image as the Bill Russell, Larry Bird, and “Red” Auerbach led well-oiled machine of a team. Hard to believe they have the longest drought of the four teams, of course that only being seven years.

Who can fail to remember the big bad Boston Bruins. Their memorable championship win in 2011 was quite captivating as they took home their sixth Stanley Cup in franchise history. Goaltender Tim Thomas made some of the most magical saves I’ve ever seen, as captain Zdeno Chara and the bearded bears lifted the hardware. Another team with great past success, the Bruins always seem to be in the mix come playoff time.

The great success we have enjoyed hasn’t come without some gut wrenching shortcomings. We also learned 3-0 leads of our own aren’t safe, at the hands of the Philadelphia Flyers. The almost perfect Patriots of 2007 still bring tears to our eyes. The names of Aaron Boone and David Tyree still haunt us to this day. A game seven against the Lakers, and a robbery of a game against the Chicago Blackhawks has us fueled with pure despair.

These tough times, along with the plentiful success, has us gearing up again every season. This is why Boston fans are the greatest in the world. Spoiled or not, our passion and love for our teams is unmatched by any city’s. The only question is, who’s going to be our next champions here in Title Town?