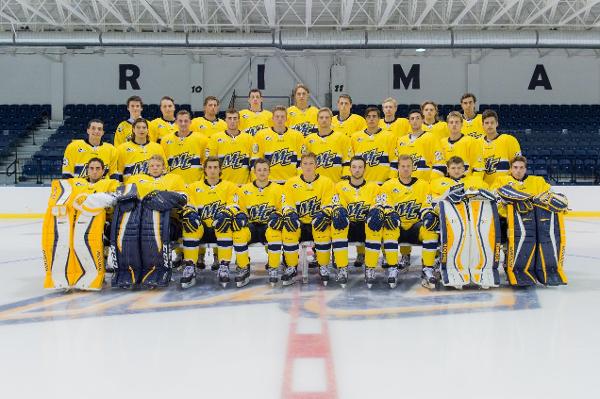 The Merrimack College Warriors finished the 2014-2015 season with a record of 16-18-4, doubling their 2013-2014 win total. With the freshmen contributing big minutes, they helped to bolster this record improvement. Last season, the Warriors had ten freshmen on the roster, lead by the team’s leading point getter, Brett Seney. With a combined team effort, the Warriors would make a run, falling short, however, during the Hockey East Quarterfinals to the nationally ranked, Boston University Terriers.

This season a total of nine freshmen join the team, and after only graduating six seniors, it is projected that the team will have a solid playoff run once again. These nine freshmen include three defensemen, four forwards, and two goaltenders.

One of the two freshmen defensemen who will be anchoring the blue line this season is Shawn Brennan of Delaware, Ohio. Brennan finished up the 2014-2015 season playing for the Topeka Roadrunners, totaling a whopping 16 points overall. The other freshman defenseman, Alex Carle of Anchorage, Alaska hopes to follow in the footsteps of his oldest brother, Matt Carle, who was a Hobey Baker winner at the University of Denver and is now a part of the NHL Tampa Bay Lightning organization. After suffering from a couple serious injuries in the past, Alex Carle hopes to bounce back better than ever. Ethan Spaxman, the 6-foot-4 defenseman of Guelph, Ontario is a promising addition to the team after a successful season playing for the Waterloo Blackhawks.

In addition to the already solid defensemen, Merrimack adds four forwards. Michael Babcock, son of longtime NHL Head Coach Mike Babcock, spent last season playing 60 games for Fargo Force, totaling four goals and eight assists. Matt Foget of Orleans, Ontario, comes in as a natural freshman, making him the youngest member on the team. Foget completed last season with the Gloucester Rangers and hopes to prove himself this season. Ludvig Larsson of Malmo, Sweden joins his older brother Alfred Larsson (So.) as a fellow forward. Alongside these newcomers is 6-foot-2 Derek Petti, weighing in at 190 pounds, making him one of the bigger forwards on the team. Petti is one of the few local players born right around the corner in Tewksbury, MA.

Hoping to help fill the shoes of the 2015 graduated starting goaltender, Rasmus Tirronen, are Craig Pantano and Drew Vogler. Pantano, who is also a local player from Bridgewater, MA, played the 2014-2015 season with the South Shore Kings earning a save percentage of .894. Vogler of Florissant, Missouri, played last season with the Topeka Roadrunners posting a save percentage of .906.

Add in this young new talent to the already talented veteran core, and the Warriors are well-equipped to make the 2014-2015 campaign a special one.
Photo Courtesy of Merrimack Athletics