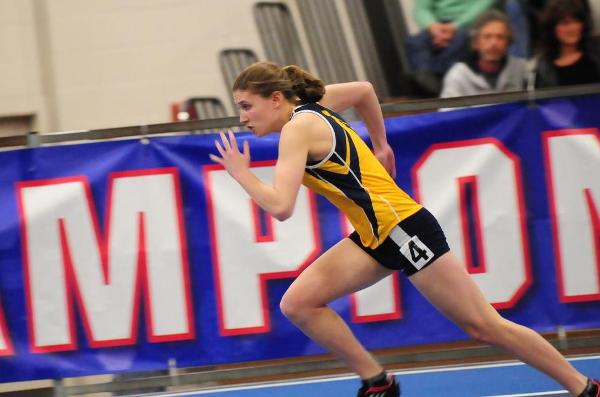 Merrimack College’s track and field standout Carly Muscaro is at it again. Her latest achievement: qualifying for the 2016 Olympic Trials.

Muscaro will be competing in the 400 meter dash at the Trials, due to her best time of 51.83 seconds which she ran last year. This qualifies her to run the B standard at the Trials, and also makes her the 68th fastest 400m runner in the world. To qualify to run the A standard, one must have a time of 51.55 seconds or less, which allows for their trip to the Trials to be paid for. About 28 to 30 women go to the Trials for the 400m. That field will be narrowed to six for the US Olympic team. Two of the six will serve as alternates while the other members will compete in the Open 400m and th 4x400m event.

“I do not plan on making the Olympic team this year. I have other goals this year including winning the NCAA DII National Championship in the 400 indoors and outdoors. We [Merrimack College’s Track and Field team] have a long season and I plan to peak at NCAA Nationals in May, not at Trials in June. The Trials are going to be a good experience for me though. I am not sure if I want to run professionally after college, but if I do then I have the 2020 Olympic Team that I can really try for. For now, I want to enjoy my college eligibility and continue breaking records and making a name for Merrimack,” Muscaro expressed.

The Trials are taking place in July 2015 at Hayward field in Eugene, Oregon. Muscaro has been there twice, once for USA Junior Nationals, ages 15 to 18 years old, in 2014 where she came in 7th place and again for USA Nationals in 2015 where she placed 22nd.

“At USA Nationals I ran against the best runners in the United States. This is the meet every USA runner dreams to compete at. I ran in a lane right next to an Olympic gold medalist, and was surrounded by my heroes,” Muscaro stated.