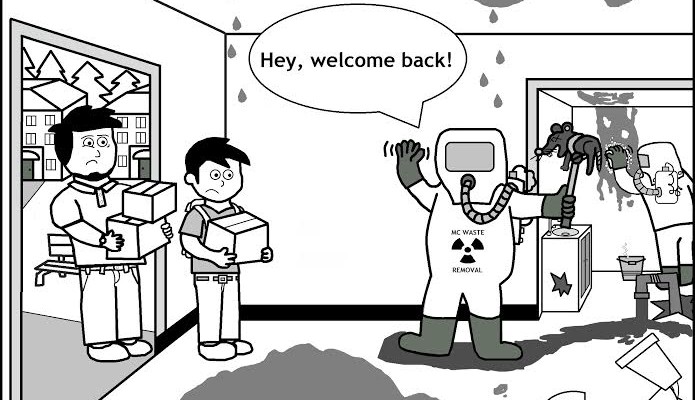 As students returned to start their final year in Apartments F, E, and D on Aug. 30, they were struck with an unpleasant smell and light flooding on the floors.

A tree root had grown through one of the sewer lines causing sewage to back up and flood out through toilets and a bathtub, said Associate Vice President of Communications James Chiavelli.

The tree root was removed. Cameras were put in the pipes to ensure there was no further damage. Facilities attempted to clean the room, but the carpets were wet and needed to be replaced, Chiavelli said.
While the rooms were being cleaned and repaired, seven students were relocated to a nearby hotel for a few days. The college paid for cab fare of gas money for those students to get back and forth to campus.
Augusto Silva and Johnny Fletcher were among two of the students who were moved to the hotel. They said the process was frustrating, especially when they went to check in and found there was no reservation under their names.
“It was frustrating enough that we had to move out of our dorm and into a hotel,” Fletcher said. “It was even more frustrating that when we got there they had not even heard that we were coming.”
Fletcher said his dorm room “smelled of sewage and the rug was soaked. It was very unpleasant.”

None of their stuff had been damaged and they now have a brand new carpet.