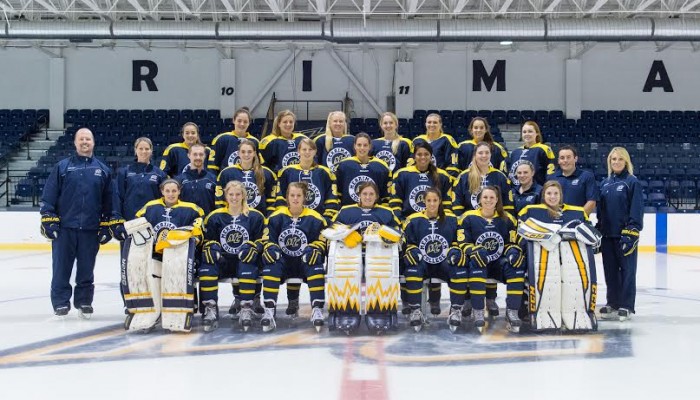 With an exhibition game September 25th against the Whitby Wolves and the season opener at Lawler Rink October 2nd, verse St. Cloud State, the Warriors prepare to enter the toughest college hockey conference in the country. “It’s going to be a challenging year, I don’t think we’re going to underestimate the challenge that we have ahead of us but I think at the same time we have had 2 years to build this program so we’ve had a significant amount of time and I think we’re going to be competitive,” stated head coach Erin Hamlen.

It has been two years since Merrimack hired their first women’s ice hockey head coach Erin Hamlen, and after two years of building the foundation of the team, it is finally time for them to make their debut in the Hockey East Conference.

Hamlen was previously the head coach of the UNE’s women’s ice hockey team and she knows the challenge of starting a program from scratch.  With their team being mostly freshmen, Hamlem explained that since there are no traditions or history for the team to pull from they must “mold the players to the way you want them to be instead of having the leadership that can guide them.”

Hamlen went on to say that the games against the top half of the conference such as BU, BC and Northeastern will be some of the tougher games the team will play. “I think we will walk into those games and still have a chance of winning and we can walk in as in the underdogs and kind of make our own history when it comes to the Hockey East world this year.”

The warriors do not want to be taken lightly. They may be a young team but they plan on making noise against every opponent they face. Hamlen said, “on any given night anything can happen and we are going to try and put our best foot forward every time.” With the season just weeks away the energy and the spirits of the team are high and the ladies are ready to show what Merrimack women’s hockey is all about.