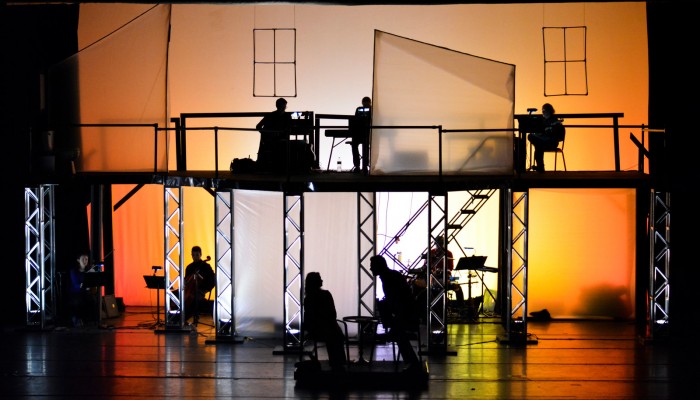 The second you step foot in the theater you can tell “Next to Normal” won’t be your typical musical, and indeed it isn’t. “Next to Normal” cuts deep on topics relatable to modern day friends and family, touching upon issues between family members, death, drug abuse, and most notably mental illness.

Although the show talks about these trying issues it sprinkles in some comic relief in plenty of appropriate places but will keep you asking yourself: in this day and age, what is normal?

“As we started the process, we found out mental illness is everywhere. A lot of people are affected by it and that’s one of the reasons why we’re excited for this show to hit campus. Almost everyone is affected by mental illness, either themselves or somebody very close to them, and this show is meant to be very relatable in that sense,” said Nathaniel Vilandre, the assistant director.

“Mick and Mike are playing characters that they had to work to really find grounding in because they’re not like their characters, and same with Emily and all of them had their journey to get there,” said Vilandre, “it was really fun to see them get there.”

From start to finish, each character takes on a clear personality of his or her own, which creates natural confliction and tension and drives the story forward.

“Instead of focusing on how do I play bipolar or schizophrenic, I focused on how do I showcase Diana’s emotion,” Mick said about her approach to such a dynamic and difficult character to play. Mike mentioned “Brian and Nate have also been extremely helpful in finding ways for us to connect in the appropriate ways and disconnect in others” on their characters relationship in the play.

“Through a directing standpoint Brian and I gave them a lot of literature. Brian our director has a close friend who suffers from bipolar disorder and has been through ECT, and she has a very open blog about it as well. We read some of her blog and also some Boston Globe articles; some clinical articles that helped Mike because it talked about loved ones” Vilandre added. Micks’ character is trapped in an inescapable prison of her own thoughts that her family struggles to understand.

The second you walk into the theater you feel as though you’re stepping into a rock concert. The Onstagers use the entire height and width of the Rogers Center proscenium to be able to fit their set, and what a sight it is; from the band being scattered throughout the stage, to the metal scaffolding, the production aspect of this show should not be overlooked. This set is by far the most entertaining and engaging I have seen since the 2013 season when the Onstagers created a monster set for “The Producers” and another for “Little Shop of Horrors.”

There are four chances to see ““Next to Normal”” including this Thursday April 9th, through Saturday April 11th at 7:30 as well as a matinee Saturday at 2:00 in the Rogers Center. More information can be found on their Facebook page by searching “Merrimack College Onstagers.”